Both Casper Ruud and Andrey Rublev compiled 2-1 group-stage records to progress to Saturday's semi-finals in Turin. The lone loss for each man at the 2022 Nitto ATP Finals came against one of the game's all-time greats: Ruud fell to Rafael Nadal while Rublev was turned back by Novak Djokovic.

Norway's Ruud was already through to the semis when he came up against Rafa, his wins against Felix Auger-Aliassime and Taylor Fritz enough to clinch first place in the Green Group. Those two victories matched his win total across four events after the US Open.

"I didn't imagine that I would be in that position after two matches, but luckily I was," a recharged Ruud said of his early qualification for the knockout rounds.

As such, he was able to conserve some energy on Thursday against Nadal at the tail-end of a gruelling season: "I just tried to keep my flow going, [made sure] that I had a good rhythm... not risking too much in terms of my body and the physical aspects of the match."

Rublev had no such luxury in his Friday Red Group finale against Stefanos Tsitsipas — a winner-takes all showdown that essentially served as a quarter-final. The 25-year-old had his back to the wall after losing a one-sided opening set against the Greek, but Rublev clawed his way back into the match and ultimately ran away with a 3-6, 6-3, 6-2 win.

The World No. 7 was in the same position at last year's Nitto ATP Finals, needing a win in his final round-robin match to advance. Facing none other than Ruud, he fell just short of the semis with a 2-6, 7-5, 7-6(5) defeat. Now through to the knockout rounds for the first time in three consecutive appearances at the Nitto ATP Finals, Rublev has his chance for revenge. 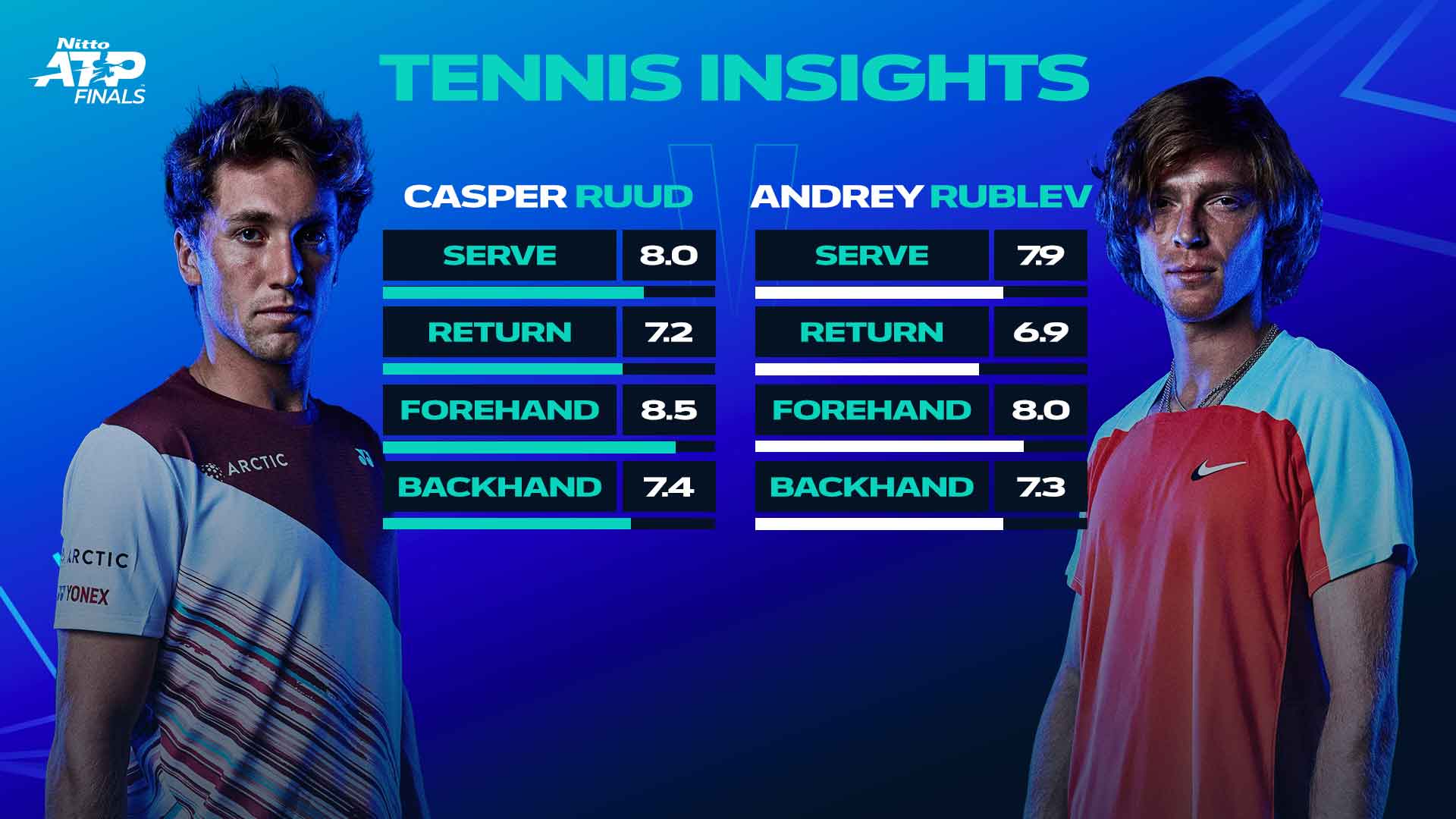 
Ruud, whose lone win in five previous ATP Head2Head meetings with Rublev came in that Turin tilt, hopes to continue to fill out his hard-court resume after following up a semi-final run in his Nitto ATP Finals debut with a breakout 2022 season on the surface. The 23-year-old reached the final in both Miami and the US Open this season, and also reached the Roland Garros final in addition to winning three tour-level titles on clay.

Rublev is seeking his fifth ATP Tour title of the 2022 season, which would match his career-best return from 2020. Nine of his 12 career titles have come on hard courts, including five indoors.