Ben Shelton turned pro after reaching the third round in Cincinnati.

Inside Shelton's Transformation From Football Nut To Tennis Star

Ben Shelton remembers riding around the Georgia Tech University tennis facility on a bike as a kid as his father, former ATP pro Bryan Shelton, coached the women’s team. Sometimes, young Ben would ride a scooter. At the time, tennis was far from his top priority.

The young American loved football first and foremost. A lefty quarterback, nothing was more thrilling than slinging a football around. Some of the school’s football stars would even stop by tennis matches and knowing the coach’s son enjoyed football, they would play catch with him.

“I kind of accepted at an early age that tennis probably wasn’t going to be his thing. I thought of team sports. He’s way more social than I was at that stage. I was more of an introvert and he’s a total extrovert. He’s loud and outgoing and has just so much energy,” Bryan said. “My parents wouldn’t let me play football and I always said if I had a son, and he wants to play, I’ll let him play.

“He just gravitated towards that. The whole time he was back there messing around I thought, ‘This guy’s going to be a pretty good football player one day.’”

At Georgia Tech, student-athletes and coaches dined at the same location, so all members of the school’s athletics department often mingled. One of the school’s stars at the time was football player Calvin Johnson, who would go on to become one of the greatest wide receivers in NFL history.

“He actually came to one of my birthday parties when I was maybe nine and gave me a signed ball. Megatron fan for life,” Ben said with a wide smile. “I liked his athleticism. He was bigger than most other wide receivers, but he was just as athletic and just as fast as anyone else out there. I enjoyed that about him and he is a class act as well, so I like that.”

His father climbed to No. 55 in the Pepperstone ATP Rankings and lifted two ATP Tour singles trophies. Shelton also grew up around tennis with his father as a college coach. But football was ‘his sport’.

“That’s what he wanted to do. He knew all the college players, not just at Georgia Tech but across the country. He knew all the pros. He knew different formations. He just knew so much about the game and was just such a fan of it,” Bryan said. “He loved playing it and he always had a football in his hand. He thought, ‘I’m going to be a professional football player one day.’” 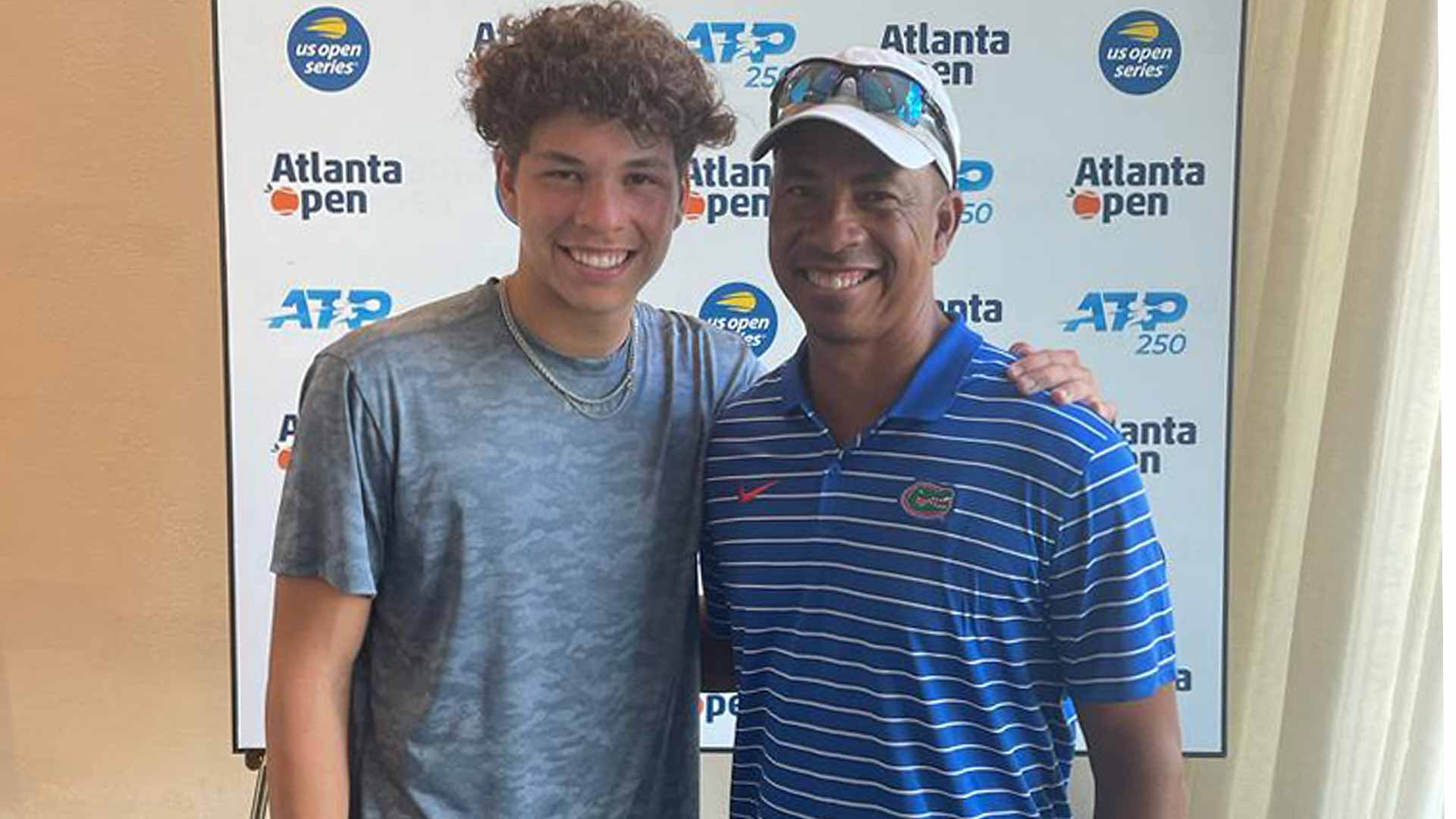 That love for the sport never waned. But Ben did not enjoy a growth spurt until his teens. And in 2012, Bryan accepted the job of men’s tennis coach at the University of Florida. Ben was nine at the time.

When the Shelton Family arrived in Gainesville, Ben slowly began to pay more attention to what was happening on the court rather than riding his scooter and throwing a football.

“It definitely swayed me to want to become a collegiate tennis player and a pro tennis player,” he said. “I think that change from being able to see people that I can relate to doing great things in tennis was definitely a big motivation for me.”

Around age 12, Shelton knew that as much as he loved football, he had to focus on one sport: tennis.

“I thought I could have more of a future in tennis,” Shelton said. “Obviously football is pretty hard on your body. I don’t know how much longer my mom wanted me to keep taking hits and obviously with my dad playing pro and being a collegiate coach, there was definitely a lot of upside to choosing a sport that he’s an expert in.”

You May Also Like: Shelton Turns Pro Ahead Of US Open

Shelton went on to compete for his father at the University of Florida, where as a freshman playing No. 5 singles, he clinched his team’s national championship victory. This year, he won the NCAA Singles title as a sophomore to earn a main draw wild card into the US Open.

Not bad for someone who was a football player first. All that time spent on a different sport was not wasted, though. All those repetitions throwing the ball helped Shelton develop his biggest weapon: a wicked lefty serve.

“Oh my gosh, there’s no doubt. There’s no doubt [it helped]. That’s probably the biggest reason,” his father said. “Hopefully there’s something that we passed on as parents. But how you develop what gifts you have is really the key. Getting his elbow up and doing certain things with the football, and really trying to perfect that kind of allowed him to come into tennis and really develop that as a weapon, I think.

“I think that’s a big part of why he loves everything above his head, whether it’s an overhead or a serve. He’s pretty dynamic with that.” 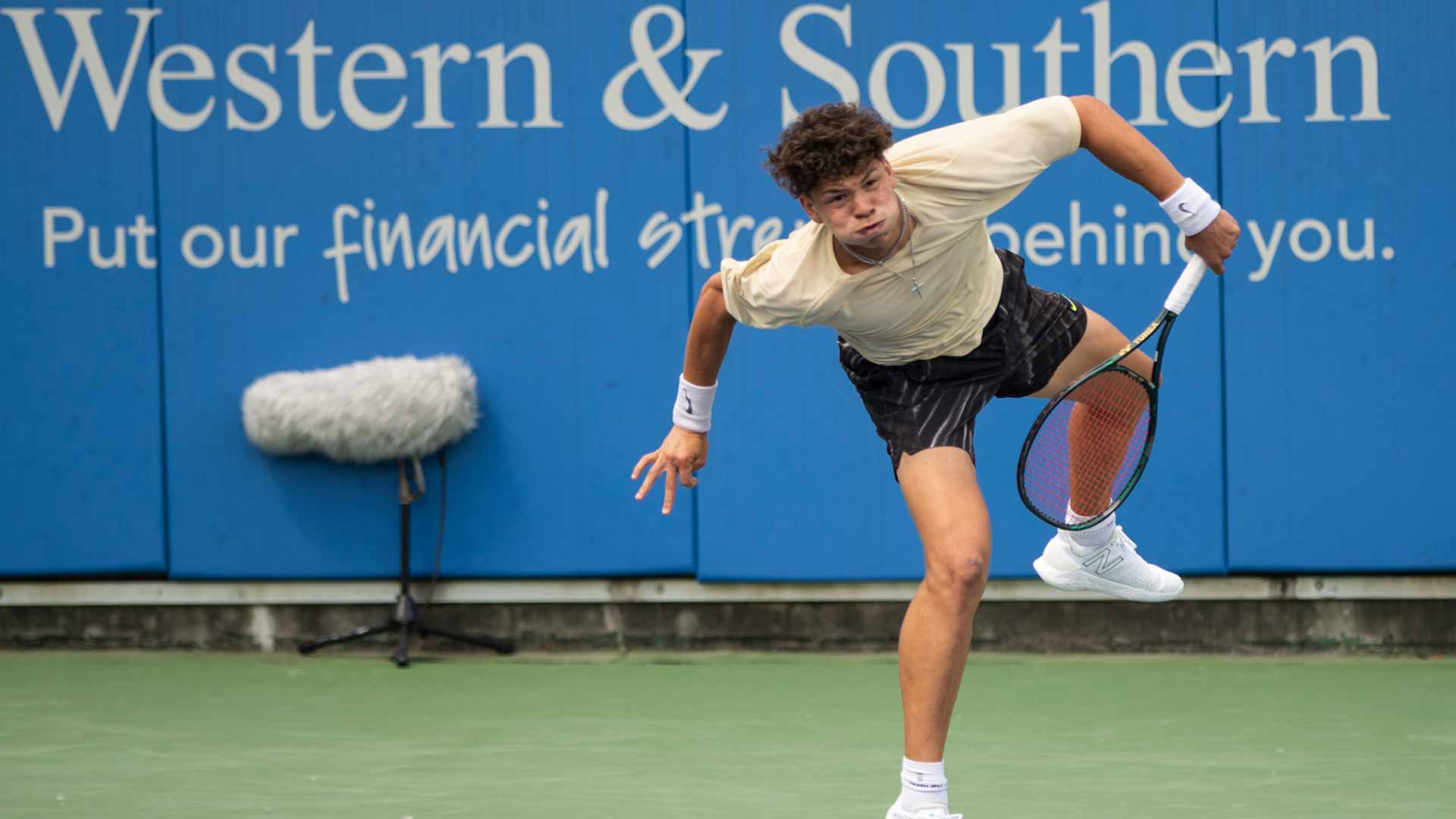 The serve has been the key to his surge this American summer. After winning the NCAA singles title, Shelton reached two ATP Challenger Tour finals, pushed John Isner to a final-set tie-break in Atlanta and advanced to the third round in Cincinnati on his ATP Masters 1000 debut. In his second match there, he stunned Top 10 star Casper Ruud.

“If he plays like he did today every match for the rest of his career, I think he will reach very far,” Ruud told ATPTour.com. “I think it surprised me a little bit how well he played. I knew he was a young, up and coming, great player. But today he was painting lines as we call it and hitting all the spots he needed to. It was really impressive to see.

“He was young, fearless and of course he is playing without pressure, so that is something I think young players could really take advantage of sometimes. He will be around for many years and he will be a problem for many years for me and any other players.”

After losing to Briton Cameron Norrie in Cincinnati, Shelton had a big decision to make. At 19, he still had two years of eligibility at Florida. After careful consideration, the teen announced earlier this week he would turn pro.

Before coming to that decision, Ben deliberated with his family. When asked what his message for his son was as a father rather than a tennis coach, Bryan spoke from the heart.

Shelton is widely considered one of the players to watch at this US Open, where he could play top seed Daniil Medvedev in the third round. But no one in the family is stressed about winning and losing now. Bryan does not want his son to put too many expectations on himself at the moment.

Ben has bought into his family’s process-oriented strategy and is simply enjoying the moment. He is still a teen who loves things like cars, watching movies with friends, playing pickup basketball and cheering on his girlfriend Anna Hall, an athletics star who also just turned pro.

“It’s been a lot of fun. It’s a good change of pace from college tennis, so I’ve enjoyed being able to play in some different cities, travel to different places and play a lot of great players,” Ben said. “I’ve enjoyed the time that I’ve had this summer.”

The early evidence shows that Shelton is just getting started.