Daniil Medvedev celebrates his maiden ATP Masters 1000 title in Cincinnati with his team.

The month of August has been dominated by Daniil Medvedev and now the Russian has a piece of silverware to show for it. On Sunday, the Russian secured his first ATP Masters 1000 title at the Western & Southern Open, defeating David Goffin 7-6(3), 6-4.

Medvedev seized his maiden Masters shield in Cincinnati, extending a dominant run of form that saw him reach three finals in three weeks. After reaching consecutive championships at the Citi Open in Washington (l. to Kyrgios) and Rogers Cup in Montreal (l. to Nadal), Medvedev was the last man standing in Cincinnati.

Get Daniil's Tecnifibre gear and save 20% (Limited time offer)

"It's hard to find words," Medvedev told ESPN's Brad Gilbert after the match. "It's the hard work I've been putting in. It would not be good to lose three finals in a row, so I'm really happy about this. I started cramping at 5-3, actually. It was the first time I cramped in three weeks. I made four serves he didn't return and it was unbelievable." 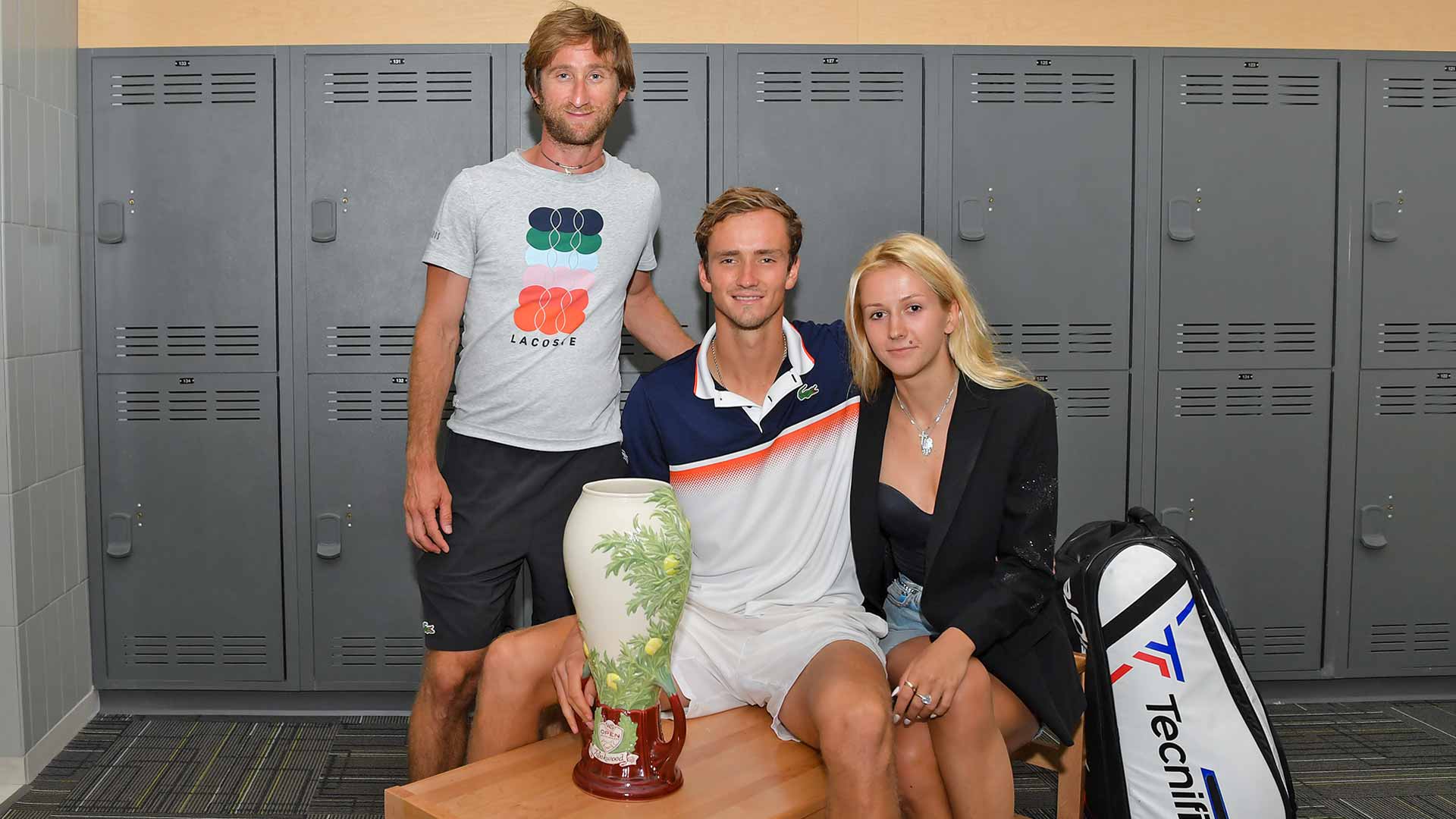 The 23-year-old is one of the hottest players on the planet and is in strong position to qualify for the Nitto ATP Finals in London. Up to a career-high No. 5 in the ATP Rankings, he will be the first Russian to feature in the Top 5 since Nikolay Davydenko in 2010. He now leads ATP Tour with 44 match wins this year, including a tour-leading 31 on hard courts.

One day after storming back to upset defending champion Novak Djokovic, the Russian made the most of the opportunity with an impressive display against Goffin. He is the fifth player from his country to win a ATP Masters 1000 shield, joining Marat Safin (5), Davydenko (3), Andrei Chesnokov (2) and Karen Khachanov (1). Khachanov most recently prevailed in Paris last year.

"I have to say even if I wouldn't have finished with the trophy, these weeks were amazing and the best in my life. But of course I think with the trophy is better. Especially if I would have lost three finals in a row, I would have not doubted myself but started asking myself how is it possible, three finals, lost all of them? What should I do differently in the final?

"I don't have to ask myself these questions because I won the final. It's been the best weeks in my life. My serve was the best in my life. My tennis was really consistent. I didn't have one bad match. I'm just extremely happy."

You May Also Like: Read & Watch: Look Back At The 2019 Western & Southern Open

In Saturday's semi-finals, Medvedev flipped the script in a flash to upend Djokovic, employing a hyper-aggressive gameplan. Predicated on a go-for-broke serving strategy, he rallied from a set down to reach the final. And there, it would be much of the same as play got underway at the Lindner Family Tennis Center.

The Belgian managed to put just one of Medvedev's first nine serves in play. On his own serve, the 28-year-old struggled to adjust his opponent's baseline rhythm. The Russian broke for 3-1 with a cross-court winner.

But, Goffin would draw level for 4-all with a pair of backhand winners and grinded out a seven-minute hold to consolidate. Medvedev, who was playing his 18th match in 20 days, fought to keep his energy up as the set progressed, but a rifled forehand winner saw him surge to a 5/2 lead in the ensuing tie-break. Two points later, he sealed the opener after 56 minutes.

Medvedev refused to concede the lead as the second set got underway. An immediate break in the opening game was all he needed to cross the finish line. The ninth seed held his nerve with all to play for, saving two break points when serving for the title at 5-4. A frustrated Medvedev cracked his racquet frame in frustration at 15/40, but remarkably fired four straight monster serves to triumph. He struck a 123 mph second serve to save the first break chance, followed by three straight aces to close it out after one hour and 39 minutes.

Revenge was sweet for Medvedev, who fell to Goffin in a gripping five-setter at Wimbledon last month. He moves to 2-1 in their FedEx ATP Head2Head series.

It has been a fruitful stretch for players seeking their Masters 1000 breakthrough. For the third straight year there are at least three first-time Masters 1000 champions. Medvedev joins Indian Wells titlist Dominic Thiem and Monte-Carlo winner Fabio Fognini as players to secure their maiden Masters in 2019.

In becoming the youngest champion in Cincinnati since 21-year-old Andy Murray in 2008, Medvedev adds a fifth ATP Tour title. It's his second of the year, after prevailing in Sofia in February.

Goffin, meanwhile, was bidding to become the first Belgian to clinch a Masters 1000 title. He was appearing in his first final at the level and enters the US Open in strong form. Also the finalist in Halle and a quarter-finalist at Wimbledon last month, Goffin returns to the Top 15 for the first time since 2018.

"He played unbelievable the last three weeks," Goffin said of Medvedev. "He's super solid. He doesn't miss. It's like playing against a wall. That's why everybody is struggling, because he's so consistent, now with more confidence.