Rolling the dice with a barrage of big second serves, Daniil Medvedev battled back from the brink of defeat to stun top seed and defending champion Novak Djokovic at the Western & Southern Open on Saturday. The Russian reached his second ATP Masters 1000 final in as many weeks in Cincinnati.

Medvedev mounted a furious comeback to advance, having trailed Djokovic by 6-3, 3-2 30/40. He would deny the critical break point and flipped the script in a flash, prevailing 3-6, 6-3, 6-3 in one hour and 43 minutes. It marked the first time Djokovic had lost a semi-final at the ATP Masters 1000 level when winning the first set since 2013 (to Del Potro in Indian Wells).

The World No. 8 reversed course in stunning fashion in the second and third sets, varying his pace and angles on serve and refusing to allow Djokovic to establish any rhythm. He left the Serbian in search of answers, often effectively rushing his serve with great success. His 16 aces are the most that Djokovic has allowed in a three-set match this year.

"To be honest, I don't know how I did it," Medvedev told Brad Gilbert of ESPN. "I was so tired in the first set and playing Novak I thought I wasn't able to keep the intensity. Then, the one momentum change in the second set was the difference. The crowd gave me so much energy.

"Usually I'll go bigger on my second serve when it's not working and Novak was just destroying me in the first set. At one moment, I said to myself why do a normal second serve if I'm going to lose the point. I started to win much more after that."

Medvedev advanced to his third straight tour-level final following championship appearances at the Citi Open in Washington (l. to Kyrgios) and the Rogers Cup in Montreal (l. to Nadal). He will face David Goffin on Sunday in what will be their third FedEx ATP Head2Head meeting. All encounters have come in 2019, with Medvedev winning at the Australian Open and Goffin exacting revenge in a five-set thriller at Wimbledon.

"I need to win (smiling)," said Medvedev. "No, actually, my mentality is always I take every match the same, from the first round, because I always say if you lose in the first round you won't be in the final, so why to take it different?

"Talking about the final against Rafa, it was a tough one. I would say actually I don't have any regrets. I mean, if it would be 7-6 in the third, then I would be sitting here, saying I had my chances. I had zero chances.

"Against Nick, I had my chances. I didn't use them. I'm going to go out there tomorrow and be ready to fight, be consistent, and hopefully I can be the winner."

The Russian is in strong position to punch his ticket to the Nitto ATP Finals in London, adding a tour-leading 43rd match win this year. He also owns 30 victories on hard courts - 10 more than second-placed Roberto Bautista Agut and Stefanos Tsitsipas.

Djokovic was at his ruthless best in the first set, committing just three unforced errors and converting eight of nine points at the net. He seized the lone break point of the opener, using his forehand to open the court and put Medvedev on defense.

Playing his 17th match in 19 days, Medvedev would receive a visit from the physio (right arm) midway through the second set. Despite appearing in considerable pain, it would prove to exactly what he needed to flip the script. He reeled off 12 of the next 14 points to break Djokovic out of nowhere and force a decider. He struck 14 winners and hit just four unforced errors in the set. 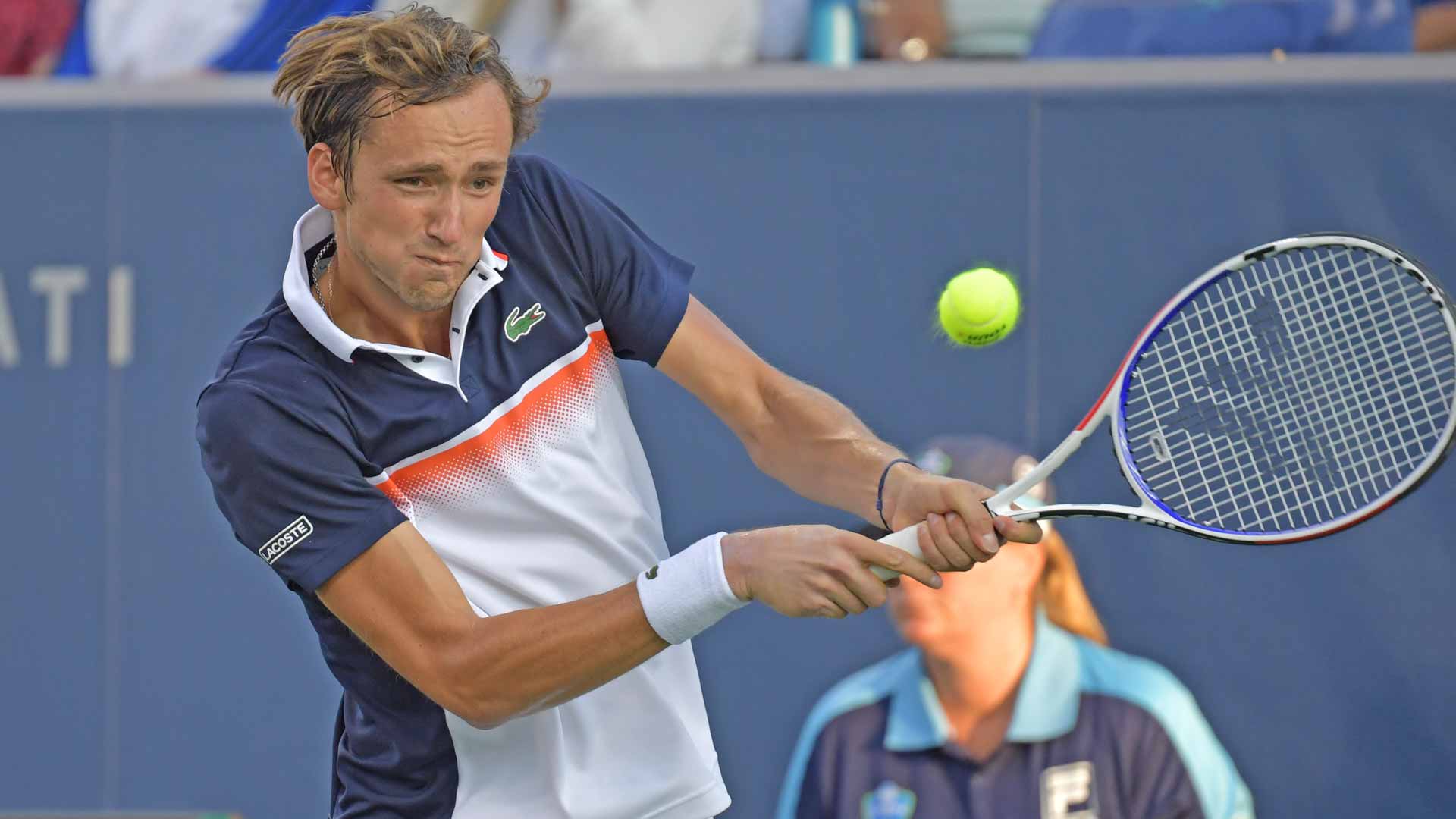 It was in that moment that Medvedev decided to change his tactic on his second serve. It proved to be a critical decision. Going bigger with his delivery and varying his pace of play, the 23-year-old stormed back. His average second serve speed increased by 11 mph in the second and third sets.

After appearing as if Djokovic would run away with the match, they were suddenly headed to a decider in front of a packed crowd at the Lindner Family Tennis Center. The Serbian saw his streak of 37 consecutive service games won, since being broken to open the tournament, come to a close.

Medvedev kept his foot on the pedal as the third set got underway. He earned a quick break for 2-1 and did not look back. The Russian cruised to the finish line, capped with a perfect passing shot on his first match point.

It was his second win over Djokovic this year, following a 6-3, 4-6, 6-2 victory at the Rolex Monte-Carlo Masters. The Serbian still leads their FedEx ATP Head2Head by a count of 3-2.

You May Also Like: David's Dream: Goffin Surges Into First Masters 1000 Final

Djokovic was denied a 50th ATP Masters 1000 final appearance. He was bidding to join Rafael Nadal (51) and Roger Federer (50) in the exclusive club. One year ago, the Serbian completed the full set of Masters 1000 titles with his first Cincinnati crown.

Did You Know?
Medvedev is the first Russian to reach the final in the 120 years of the Western & Southern Open.