ATP Staff
This article contains:
The winner will play Tsitsipas in Sunday's final

Novak Djokovic earned one of the biggest wins of his career against Rafael Nadal on Friday evening in their blockbuster Roland Garros semi-final, which was one of the best matches of the season, full of twists, turns and sensational tennis.

The odds were stacked against the World No. 1, as Nadal was 105-2 at the clay-court Grand Slam and 7-1 at this tournament against him. But Djokovic showed incredible mental fortitude and physical skill in a 3-6, 6-3, 7-6(4), 6-2 victory over four hours and 22 minutes.

"It was for sure the most beautiful match I've played here in Paris," Djokovic said on court in French.

The top seed lost the first five games and appeared in danger of letting the match slip away. But Djokovic never lost his focus against the 13-time champion, and now he will play 2019 Nitto ATP Finals winner Stefanos Tsitsipas for the Coupe des Mousquetaires.

Nadal was chasing a record 21st Grand Slam title, which would have moved him past Roger Federer to stand alone atop the all-time list. But now Djokovic is one victory from completing a second Career Grand Slam and earn his 19th major crown, which would put him within one of Federer and Nadal.

Based on his nearly flawless performance Friday, you would not know that Djokovic trailed Lorenzo Musetti two sets to none in the fourth round here and won just seven games against Nadal in last year's Roland Garros final. The Spaniard overwhelms opponents with his unrelenting play and unmatched focus. But Nadal ran out of answers against Djokovic's all-around jaw-dropping tennis.

The match was played on Court Philippe-Chatrier in front of a raucuous crowd, which was allowed to stay for the whole match despite a curfew in France. It was the best atmosphere since the return of fans following the COVID-19 pandemic.

"You tell yourself there is no pressure," Djokovic said. "But there is a lot of pressure, trust me." 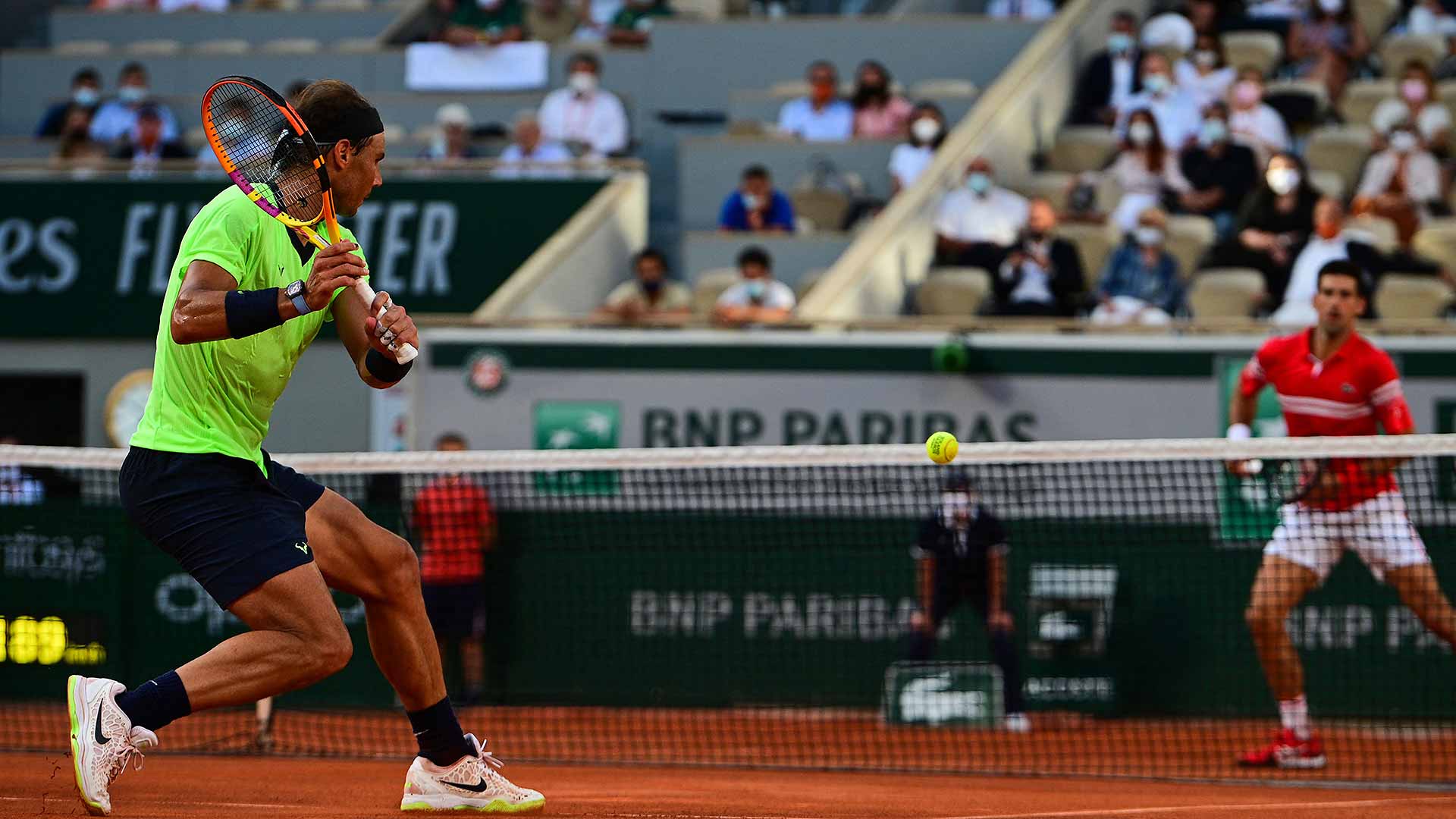 In these legends' historic ATP Head2Head rivalry, the winner of the first set had claimed 50 of their 57 meetings. Not since the 2014 Roland Garros final, won by Nadal, had one of them triumphed after losing the first set. But Djokovic flipped the script to advance to his sixth final at the clay-court Grand Slam.

“I was feeling good mentally, physically. I was motivated. I had a really clear plan in tactics, what I needed to do in order to perform better than I [did] in last year's final,” Djokovic said. “The beginning of the match was kind of resembling last year's final, but I just managed to get myself back into the first set. Even though I lost it, I felt like 3-6 down, I found my game.”

The third set proved pivotal, and it was like a heavyweight fight, with both superstars trading haymakers. They showed incredible shotmaking, athleticism and mental fortitude, playing their very best in one of the best sets in years, featuring four service breaks and 14 break points.

Djokovic let slip a chance to serve out the set at 5-4, 30/0, with a missed mid-court forehand into the net slowing his momentum. But the Serbian saved a set point at 5-6 with a daring drop shot, and he battled through a thrilling tie-break in which he chased down two critical drop shots and eventually won those points. Nadal mishit a high forehand volley long, and that proved costly.

🇷🇸 Nothing is Impossible 🇷🇸

Djokovic puts grit on full display, saving set point and capturing the third 7-6(4) for the two sets to one lead. Nadal is trailing by that margin for just the third time in his career in Paris.#RolandGarros pic.twitter.com/V6UWAIjIIf

Nadal showed his trademark grit by breaking serve immediately in the fourth set. But Djokovic accelerated to the finish, winning the final six games to reach the final.

After a slow start, the Serbian was able to pin the third seed in his backhand corner to prevent the lefty from taking the initiative in rallies with his devastating forehand. In last year's final, Djokovic bailed out of rallies early by using many drop shots. This time, Nadal was going away from his typical patterns, and after the first set he was unable to control play from the middle of the court consistently.

The top seed put Nadal under pressure in the first game of the match, earning two break points. But after saving those break points with big serves, the Spaniard raced to a 5-0 lead and eventually took the set 6-3 despite a late charge from Djokovic.

“Even though I didn't have such a great start, I was not too nervous, because I felt like I was hitting the ball very well,” Djokovic said. “It was just a matter of me working my way into the match and adjusting to his ball, which is completely different than any other player's ball. The amount of spin he plays with from the forehand corner, it's tremendous. But I was ready.”

Nadal showed great intensity from the first ball in the opener, attacking relentlessly and forcing Djokovic to try to play offence from difficult positions on the court. At points, the Serbian blasted balls at the lefty's forehand and had success, but he struggled with his drop shot, much like he did in last year's championship match on this court.

When Nadal took the first big strike in rallies, he was more effective at maintaining control of points and finishing them. He hit his third double fault of the match to give a break back, and that turned the tide. Djokovic settled down to push the Spaniard in his next service game. Although he was unable to win the set, he successfully found his rhythm and carried that momentum into the second set.

The 2016 champion let slip an early break advantage in the second with a few unforced errors doing the damage. But Djokovic remained calm and earned the decisive break at 3-2. The top seed, who at times struggled to put points away at the net, saved two break points at 5-3 before levelling the match.

Djokovic put pressure on Nadal in almost every service game, and that left the 13-time champion scrambling for a way to change the rhythm of the match. Even after Nadal worked hard to retrieve one break and get back on serve in the middle of the third set, the World No. 1 was undeterred.

The 34-year-old broke back in the next game to lead 4-3 when Nadal missed a forehand into the net. The pair’s level was scintillating, with former World No. 1 Andy Murray tweeting, “You cannot play better clay court tennis than this. It’s perfect.”

Another former World No. 1, Andy Roddick, chimed in by saying, "To this point, it's one of the best matches I've ever seen."

To this point, it’s one of the best matches I’ve ever seen

Nadal had only lost one set this tournament entering the semi-finals, and that came in the quarter-finals against Diego Schwartzman. Four of the Spaniard's seven Roland Garros victories against Djokovic came in straight sets.

The last two times Djokovic and Nadal met in a Grand Slam semi-final, they also produced unforgettable matches. At Wimbledon in 2018, Djokovic defeated Nadal 10-8 in the fifth set. At Roland Garros in 2013, Djokovic served at 4-3, 40/40 in a tension-filled fifth set, but inexplicably ran into the net while moving forward to put away an easy forehand volley. The Spaniard eventually won 9-7 in the decider.

Djokovic now leads their historic ATP Head2Head rivalry 30-28, and he snapped a five-match losing streak against his great rival on clay.

Djokovic's next opponent, Tsitsipas, battled past Alexander Zverev 6-3, 6-3, 4-6, 4-6, 6-3 in three hours and 37 minutes in the day's first semi-final. The Serbian owns a 5-2 advantage against the 22-year-old, and he defeated him in five sets in last year's Roland Garros semi-finals.