Novak Djokovic and Rafael Nadal most recently played at Roland Garros in the 2020 final, which was won by the Spaniard.

Novak Djokovic and Rafael Nadal have battled more times in their ATP Head2Head rivalry than any players in history. On Friday, they met for the ninth time at Roland Garros.

Nadal has dominated the clay-court Grand Slam throughout his career, earning a jaw-dropping 13 titles. But Djokovic became the first player to beat him twice on the Parisian terre battue, defeating the legendary lefty in four gripping sets.

Nadal now leads the Serbian 7-2 in their Roland Garros series. ATPTour.com looks back at all their meetings at the clay-court Grand Slam.

2021 Roland Garros SF, clay, Djokovic d. Nadal 3-6, 6-3, 7-6(4), 6-2
Djokovic admitted before this clash that facing Nadal at Roland Garros is "not like any other match". The Serbian knew the 13-time champion was 105-2 at this tournament and that beating him would take an incredible effort. And that is exactly what the World No. 1 delivered in front of a raucous crowd inside Court Philippe-Chatrier, creating the most electric atmosphere since the start of the COVID-19 pandemic.

Djokovic did not panic when he fell behind 0-5 in the first set, which seemed like a mirror image of when Nadal won the opener 6-0 in last year's Paris final. This time, Djokovic settled down and battled back to win three games in the first set to dig into the match. He then methodically played with aggression to the Spaniard's forehand corner, pinning him there to prevent the lefty from taking the initiative with his biggest weapon. The World No. 1 let slip an opportunity to serve out the third set, and faced a set point two games later. But Djokovic hit a daring backhand drop shot to escape that game, and played a nearly flawless tie-break to take a two-sets-to-one lead. Nadal showed his typical grit to take a 2-0 lead and make a push to force a decider, but the 34-year-old won the final six games of the match to earn one of the biggest victories of his career.

“[It was] just one of these nights and matches that you will remember forever,” Djokovic said. 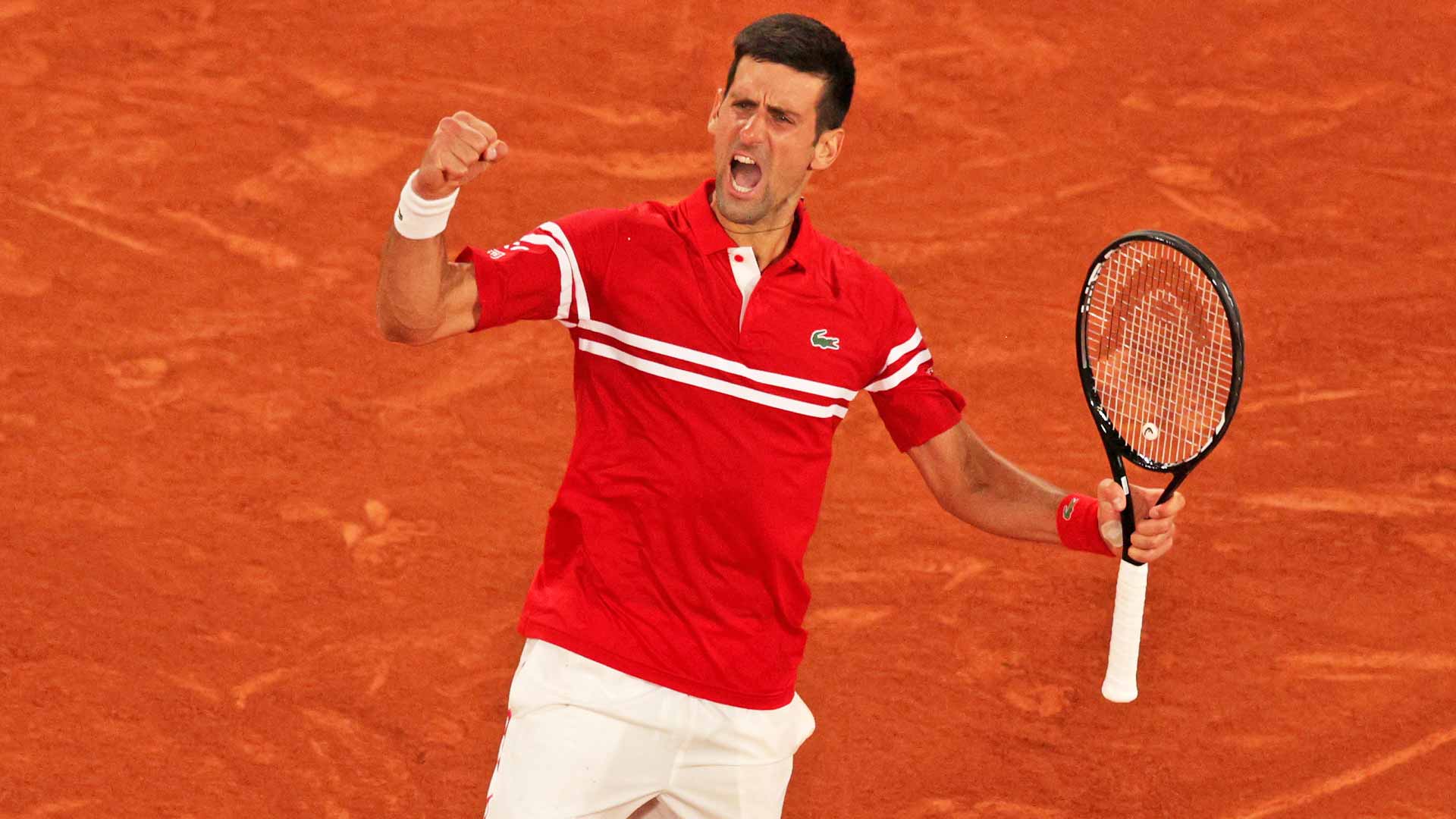 2020 Roland Garros Final, clay, Nadal d. Djokovic 6-0, 6-2, 7-5
Djokovic won the Internazionali BNL d'Italia leading into Roland Garros, and when he reached the Paris final, the Serbian had a 37-1 record on the 2020 season. But that mattered little to Nadal, who played an extraordinary match to defeat the top seed in two hours and 41 minutes. Nadal had not beaten Djokovic in straight sets at a Grand Slam since the 2008 Roland Garros semi-finals, and this was the Spaniard's most lopsided win at a major in their rivalry. Nadal deserves credit for his relentless offence from the baseline. Not only did the lefty crush 31 winners in the match, but he only made 14 unforced errors. The more you go for it, the more often you typically miss. But on Court Philippe-Chatrier, the Spaniard barely missed at all.

Djokovic was trying to win his 18th Grand Slam title and his second trophy at Roland Garros. He could have become the first man in the Open Era to complete two Career Grand Slams, but 52 unforced errors were his undoing. 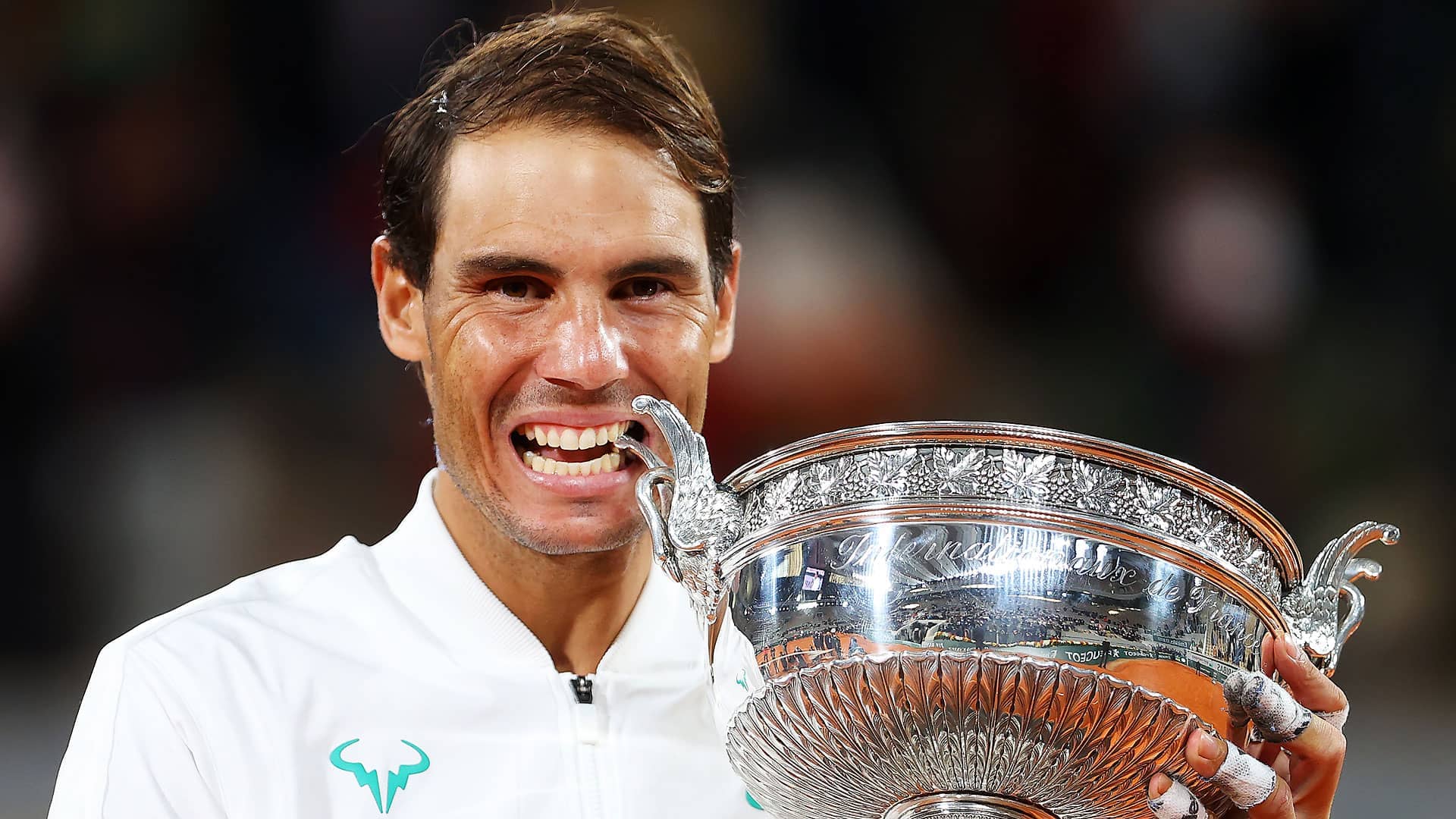 2015 Roland Garros QF, clay, Djokovic d. Nadal 75 63 61
On his seventh attempt, Djokovic finally dethroned nine-time champion Nadal on the red clay of Roland Garros, handing the Spaniard just his second loss in Paris and maintaining his hopes of completing the career Grand Slam. In one of the most highly anticipated Grand Slam quarter-finals in history, Djokovic raced to a 4-love lead in the first set before sixth-seeded Nadal battled back to level the match. Despite the momentum shift, the Serb would find his footing to claim the first set in 67 minutes.

Djokovic was dominant on his serve in the second set, claiming 16 of 18 straight service points, before eventually taking a two-set lead. He carried that momentum into the final set, limiting Nadal to just three total forehand winners and claiming victory in two hours and 26 minutes.

2014 Roland Garros F, clay, Nadal d. Djokovic 36 75 62 64
Nadal prevented Djokovic from completing a career Grand Slam, as he retained his No. 1 Emirates ATP Ranking and became the first player in history to win nine titles at a major. He also drew level with Pete Sampras at No. 2 in the Grand Slam title-leaders list on 14 major crowns.

The Spaniard had lost eight of his past nine sets against Djokovic entering the Roland Garros final, and once again fell behind to start the match as Djokovic broke in the eighth game and survived a pair of break points. Though the winner of the first set had gone on to triumph nine times in their 11 previous Grand Slam meetings, a free-swinging Nadal drew level at a set apiece with a break and quickly raced out to a 3-0 lead in the third. The Serbian found renewed energy in the fourth set, recovering a break in the seventh game, but was unable to hold serve to stay in the match as he double-faulted on championship point. 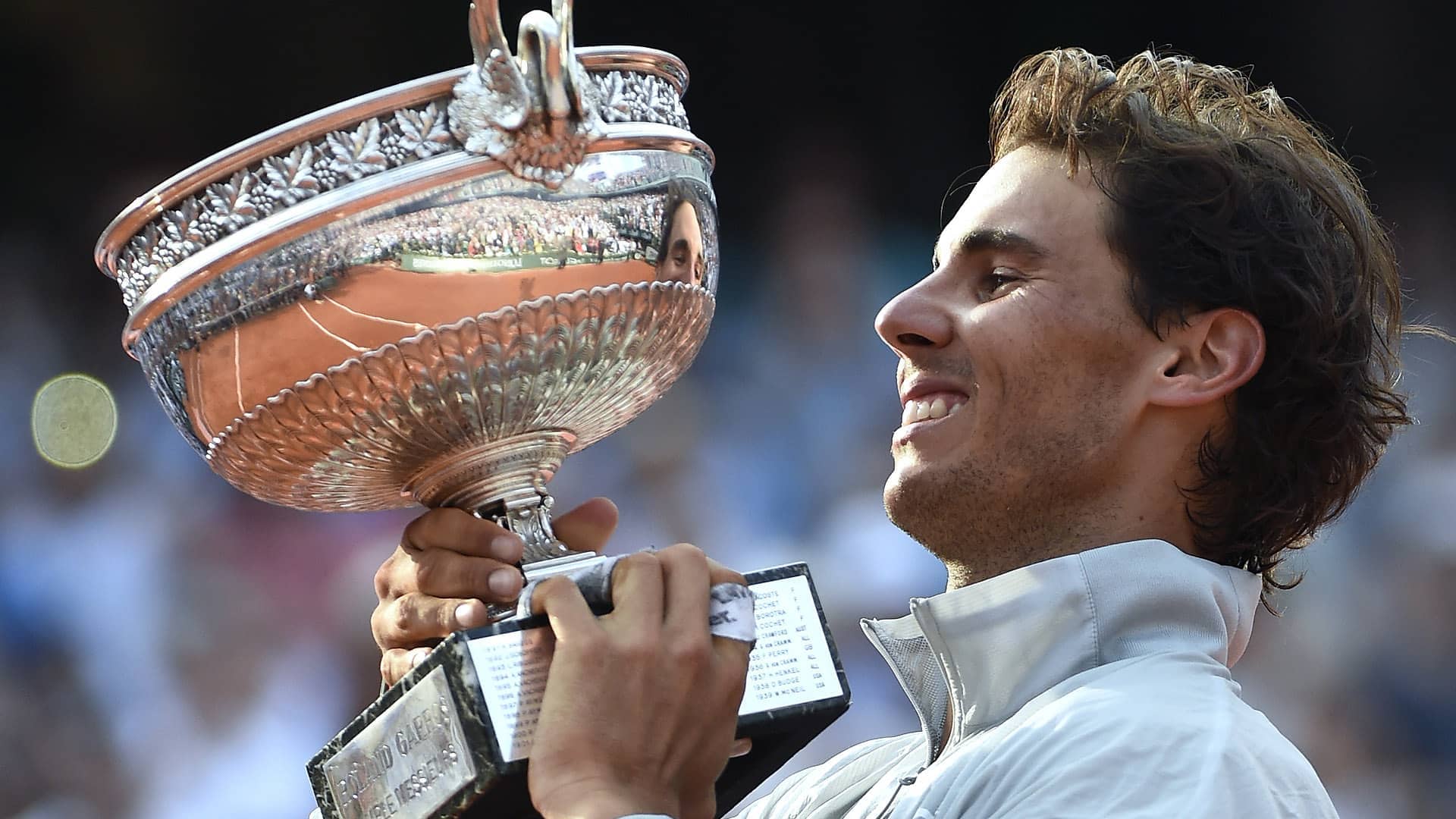 2013 Roland Garros semi-final, Paris, clay, Nadal d. Djokovic 64 36 61 67(3) 97
Both players were competing for a shot at history. Djokovic was attempting to have a shot at winning his first Roland Garros crown, which would make him the eighth man in tennis history to complete the career Grand Slam. Nadal was going for an eighth title in Paris. Djokovic had dealt Nadal a harsh defeat in their previous meeting at the Monte-Carlo Rolex Masters, where he ended the Spaniard’s 46-match winning streak at the event. Did it weigh on Nadal’s mind? The Spaniard was two points from victory when he led 6-5, 30/15 in the fourth set, but he tightened up and Djokovic fought back into contention. Nadal then came back from a 2-4 deficit in the drama-filled fifth set, which lasted 87 minutes, to give the match an enthralling finish. The semi-final last four hours and 37 minutes and kept alive Nadal’s 21-match winning streak. It was only the second five-set match Nadal had played at the major, with the first being a first-round win over John Isner in 2011.

2012 Roland Garros final, Paris, clay, Nadal d. Djokovic 64 63 26 75
The two were meeting for the fourth time at Roland Garros, with Nadal taking their previous three Paris clashes in straight sets. Djokovic was appearing in the final for the first time. In a final that was played over two days due to several rain delays, Nadal hit 34 winners to 29 unforced errors, and led two sets and a break before the Serbian rallied to win eight consecutive games en route to clinching his first set over Nadal at the tournament. He took a 2-1 break lead before play was suspended for the day on 10 June. When played resumed on Monday, Nadal broke back to level at 2-all and went on to wrap up the final victory in three hours and 49 minutes after Djokovic hit his fourth double fault to end the match. Djokovic was looking to become the first man since Rod Laver in 1969 to hold all four Grand Slam championship titles. Nadal improved to 3-0 against Djokovic on clay in 2012. 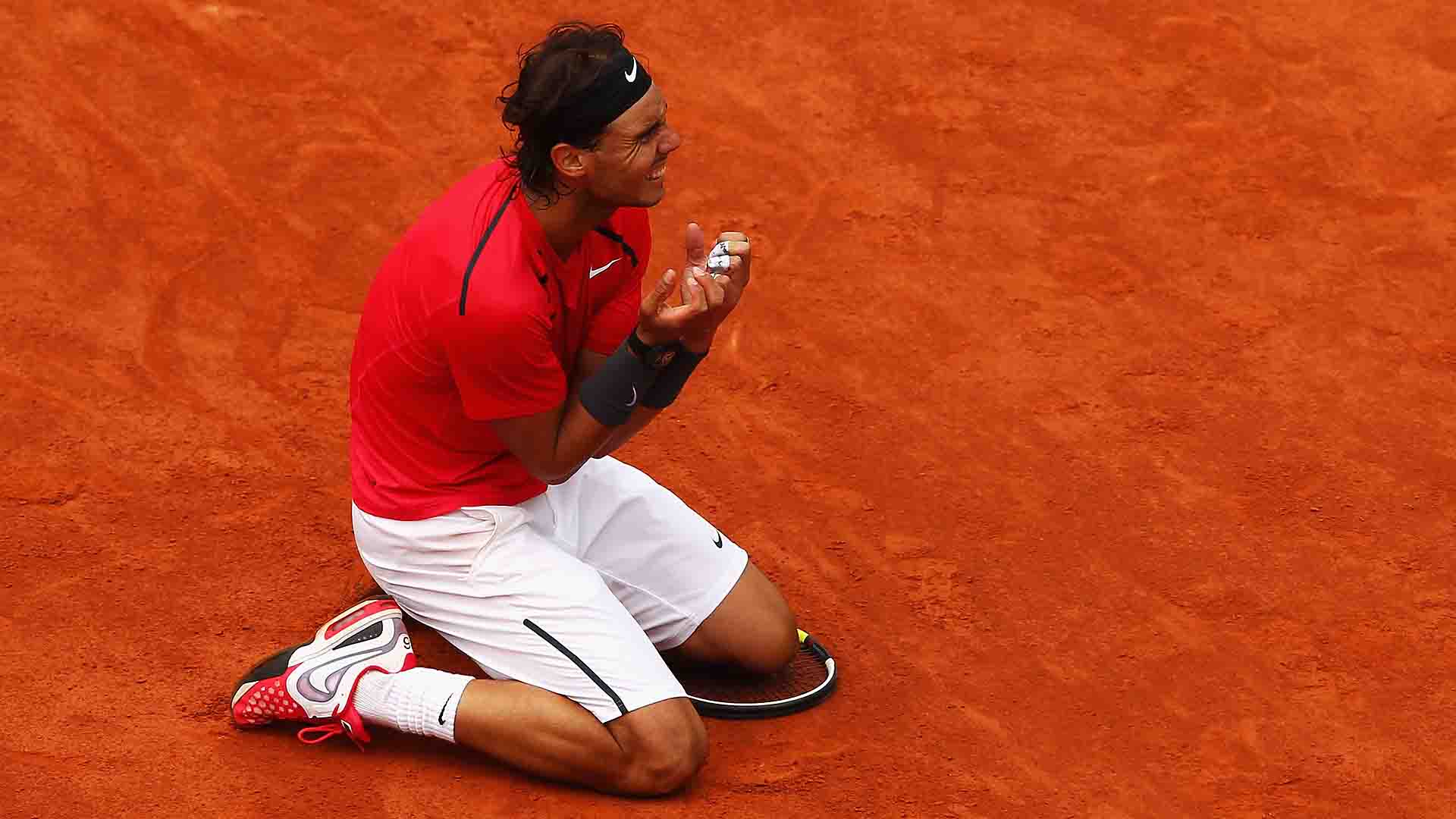 2008 Roland Garros semi-final, Paris, clay, Nadal d. Djokovic 64 62 76(3)
Three-time defending champion Rafael Nadal tightened his grip on the No. 2 spot in the South African Airways ATP Rankings by extending his Roland Garros record to 27-0 with a 6-4, 6-2, 7-6(3) win over No. 3-ranked Novak Djokovic in two hours and 49 minutes. Nadal became the first man since Ivan Lendl from 1984-1987 to reach four consecutive finals, and just the third man in the Open Era to do so. Djokovic was unable to generate any break points on Nadal’s serve throughout the first set and, with his attacking play nullified by great defense from Nadal, he went on to lose the first set 6-4 after 57 minutes. The Spaniard closed out the set 6-2 with a forehand winner after 91 minutes, and put the match out of Djokovic’s reach by going up a double break in the third set. Djokovic fought back and had a chance to win his first set against the Spaniard at Roland Garros when he earned a set point after an effective return in the 12th game. However, Nadal denied him and went on to take the match on the tie-break.

2007 Roland Garros semi-finals, Paris, clay, Nadal d. Djokovic 75 64 62
Both started the semifinal as the only ATP players to have broken the 40-win plateau on the season. Novak Djokovic, a first-time Grand Slam semifinalist, challenged Rafael Nadal in the 66-minute first set as he came from down two breaks to get back on serve at five games all. But Nadal promptly closed the set as he won the next two games. Djokovic had an opportunity to take the 2-0 lead in the next set, but Nadal saved three break points and never looked back. He converted on three of his remaining four break chances in the match to cement the 7-5, 6-4, 6-2 win in two hours and 28 minutes. The Spaniard went on to become the second player in Roland Garros history (since 1925) to win three consecutive titles in Paris.

2006 Roland Garros quarter-finals, Paris, clay, Nadal d. Djokovic 64 64 ret. (thigh, back)
Defending champion Rafael Nadal struggled with his serve, but Novak Djokovic was never 100 per cent fit and attempted to keep the points short throughout his maiden Grand Slam quarterfinal. Nadal, who led Djokovic 6-4, 6-4, notched his 58th consecutive clay-court victory when the World No. 63 retired with a back and thigh injury after one hour and 54 minutes. Nadal extended his perfect Roland Garros record to 12-0 and stood two wins away from a century of career wins (98-12) on crushed brick.