ATP Staff
This article contains:
Austrian to face Nadal for the title

It took four hours and 13 minutes over two days, as well as a tremendous mental effort in a roller coaster Roland Garros semi-final that featured three rain delays. But fourth seed Dominic Thiem made history on the Parisian terre battue Saturday afternoon.

"It was an epic match. I mean, so many ups and downs and rain, going back to the locker, on court again," Thiem said. "Somehow I had the feeling that I had the lead in the whole match, and then at the end it got so tough. And at the end, both of us could [have] won, and I luckily got the better in the end."

Read More #RG19 Stories
Nadal Beats Federer
How Thiem Can Enter The Year-End No. 1 Conversation
Massu: 'Thiem Works, Thinks & Seeks To Be No. 1'

Thiem ended Djokovic’s 26-match Grand Slam winning streak as well as the Serbian’s bid for the ‘Nole Slam’, as the top seed was trying to claim a fourth consecutive major trophy for the second time in his career. Instead, Thiem will face 11-time champion Rafael Nadal Sunday in a rematch of last year's final with a chance to earn his first Grand Slam crown.

"To play Rafa here on this court, is always the ultimate challenge, one of the toughest challenges sports in general give. I played a really good match against him in Barcelona. It was six weeks ago. So of course I'll try to do similar [things] even though it's way tougher to play him here," Thiem said. "But I'll try to keep all the positive emotions I'm having right now from this amazing match today, and go with a really positive mind into the match tomorrow, and then we'll see."

The Austrian let slip two match points when he served for a spot in the final at 5-3 in the decider, missing two neutral-ball backhand slices to allow Djokovic back into it. But the third match point was the charm for Thiem, who crushed a massive inside-in forehand winner to finish off his victory.

World No. 4 Thiem took a 6-2, 3-6, 3-1 lead Friday in swirling winds that led to scrappy rallies before play was suspended for the night due to rain. But Djokovic raised his level Saturday after the resumption, rallying in the third set to get back on serve. Although he lost the the set, Djokovic was able to use the level he found to overcome that disappointment by forcing a decider, in which he earned a break point at 1-1.

But if Djokovic remembers any shot in particular from this match, it will be the one he hit to lose that opportunity. Thiem hit a poor drop shot that the Serbian got to in plenty of time — perhaps giving himself a chance to hit a topspin groundstroke — but Djokovic instead shoveled a flat forehand long, and Thiem then broke in the next game to take a lead that he did not relinquish.

The twists and turns were abundant in this battle, though, and Thiem certainly did not cruise to the finish line. The Austrian earned a break point at 4-1 in the fifth set before the third rain delay of the match and then got another chance after a delay that lasted just more than an hour Saturday. But Djokovic locked in to hold serve and then break back. The Serbian once again failed to capitalise on grabbing the momentum, though, hitting a double fault and making two unforced errors from 30/15 at 3-4 to allow Thiem a chance to serve out the match.

But Thiem perhaps showed the effects of nerves, making four consecutive unforced errors to go from being able to taste victory to being under significant pressure, handing the break back to Djokovic. 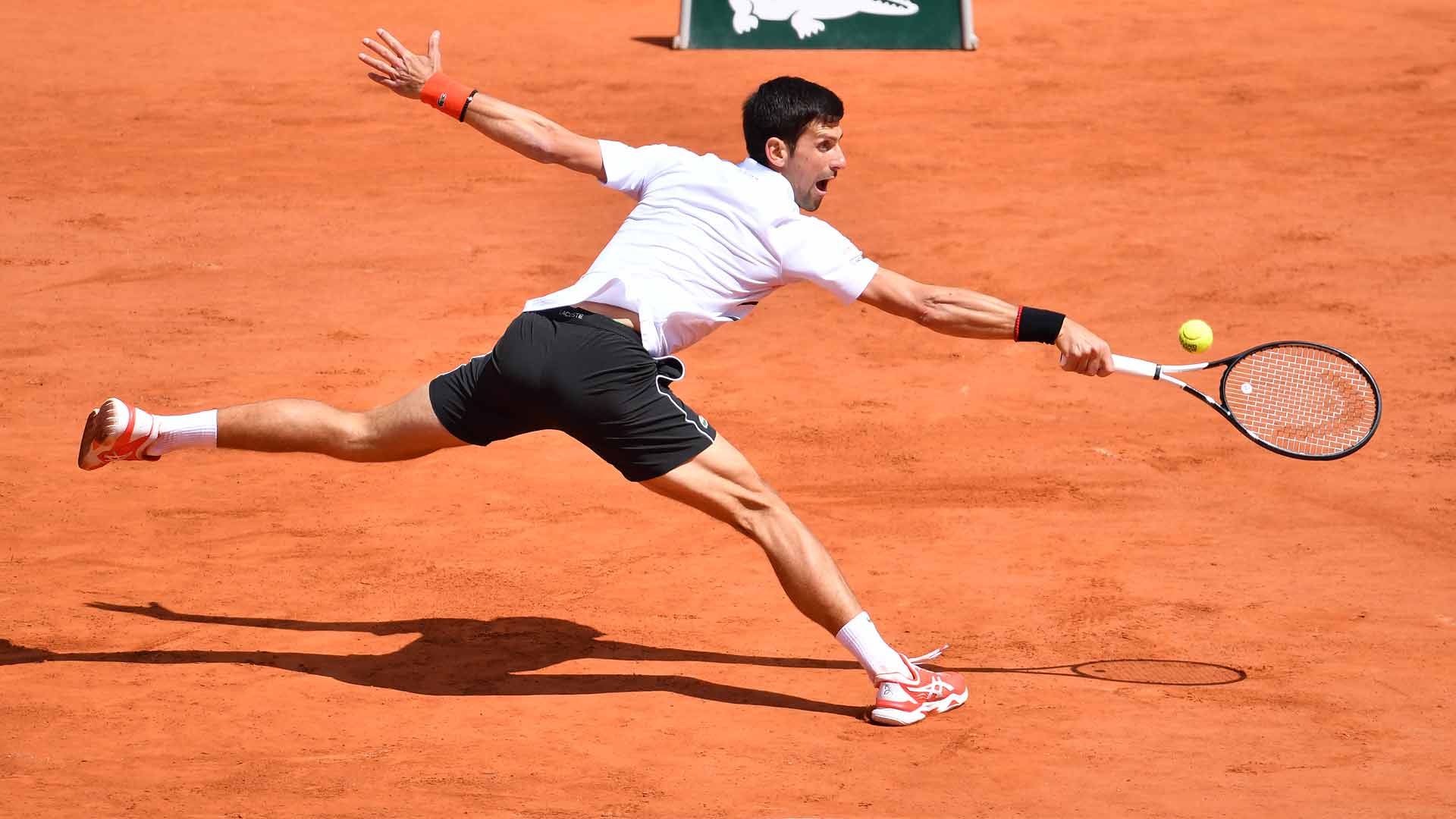 But Thiem would not be denied, breaking for the eighth time in the match at 6-5 to clinch his triumph. Djokovic had been broken just three times in his first five matches combined.

Thiem is known for the overwhelming weight of his groundstrokes from the baseline as well as his speed around the court, but the Austrian was especially effective with his drop shot on Saturday. He was successful when he was able to draw the top seed into net, as Djokovic won just 35 of 71 net points in the match.

"It was not really the game plan what I had, but it's so tough to volley or to play well at the net with all that wind," Thiem said. "If you put a good spin on it, it's so tough to volley this one. And especially on the one side where we played against the wind, I was trying to hit that short, flat slice, because the ball didn't get up again. So I think that was a pretty good tactic."

Djokovic did better at net after the match's final rain delay, hitting a couple of key forehand volley winners. But it was not enough for the Serbian, who had won three consecutive Roland Garros semi-finals. He entered the day with a 29-9 record in five-setters, and Thiem was previously 6-6.

"He played great, especially in the important moments. Made some really good slices and passing shots. He just managed to put one ball extra in the court at the end of the match," Djokovic said. "[He hit] heavy forehands and down the wind from one side was much easier to play the entire match. Obviously when we came back the last time, there was a bit less wind, but still, it was a lot of advantage, so to say, playing from that one end. But congratulations to him. He's playing great tennis. He showed why he's one of the best players in the world, and I wish him best for the final."

Djokovic was the only Roland Garros semi-finalist to make the last four without dropping a set. But the Serbian was bothered early Friday by the swirling wind and clay flying in the air. While Thiem was solid at the beginning of the match, keeping his heavy groundstrokes safely in the court, Friday’s action was moreso about Djokovic’s mistakes than Thiem taking the racquet out of the World No. 1’s hands.

Play was first delayed as Thiem served at 6-2, 2-3, 30/0, and Djokovic settled down immediately afterwards. The Serbian greatly reduced his errors, forcing Thiem to either outgrind him or go for more. And Djokovic converted his first break point of the match at 4-3 in the second set when Thiem launched a low forehand approach shot long.

That was just one of many twists in this battle, though, as Thiem increased his aggression to blast his way to the lead in the third set that he slept on overnight.

"Credit to him. He just played the right shots and put me out of the comfortable position in the court," Djokovic said. "Then he could open up as he did in the match point and finish off with a winner."

Nadal leads Thiem 8-4 in their FedEx ATP Head2Head series, including 3-0 at Roland Garros (9-0 in sets). But the Austrian has defeated the legendary lefty on clay in four consecutive seasons, most recently in the Barcelona Open Banc Sabadell semi-finals. Thiem claimed his maiden ATP Masters 1000 title on the hard courts of Indian Wells at the BNP Paribas Open earlier this year.

Did You Know?
Djokovic had won 10 consecutive Grand Slam semi-finals entering this match, going on to lift the trophy on eight of those occasions.