The 25-year-old took down big-server John Isner in the semi-finals as he stood two or three feet closer to the baseline on return to counter the height and angle of the serve. Medvedev successfully repeated this against 6’ 11” Opelka, breaking twice as he recorded victory in 85 minutes.

”I could not have dreamt of [this] at one point,” Medvedev said in his on-court interview. “With Masters, with Novak [Djokovic] and Rafael [Nadal] playing, it seemed like an untouchable achievement. Now I have four wins in five finals, which is a good score. I am just happy. I want to achieve more. I am really happy I achieved this in Canada.

“Even today, he [Opelka] showed up, he played some really good points. He was fighting until the end, he saved break points in crucial moments. Playing your first [Masters 1000] final is not easy. I played my first in Canada and won only three games.

”Playing Canada and Cincinnati, the goal is to win as many matches as possible. I was able to do it two years ago and I will try and do it again.”

The World No. 2 has now won 12 tour-level titles, with 11 of those triumphs coming on hard. He owns a 4-1 record in Masters 1000 finals, also capturing trophies in Cincinnati, Shanghai and Paris, with his one defeat in a final coming in Montreal to Rafael Nadal in 2019.

The 2020 Nitto ATP Finals champion has lifted trophies this year on hard in Marseille and grass in Marbella. Medvedev also guided Russia to the ATP Cup title in February before advancing to his second Grand Slam final at the Australian Open. 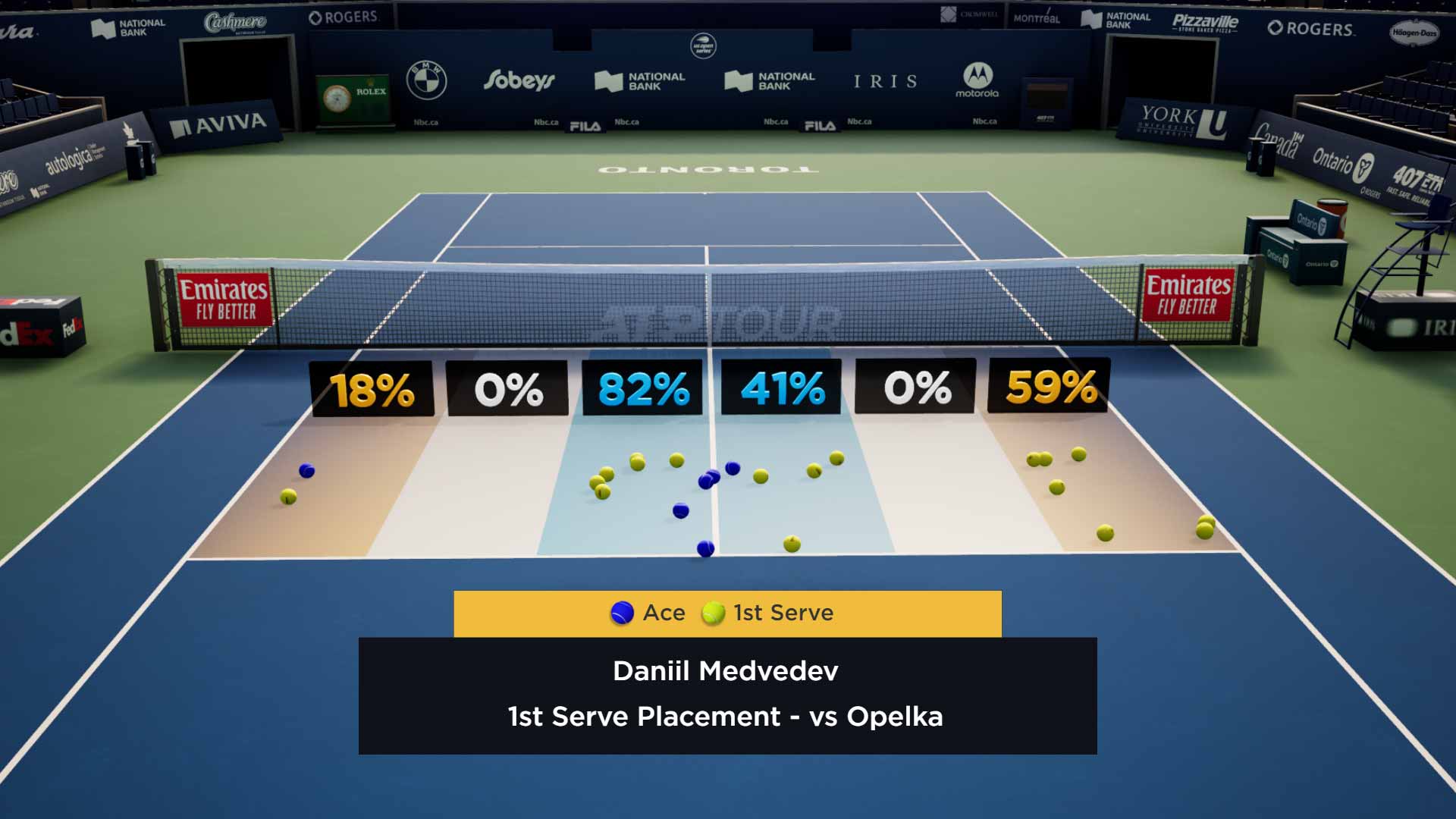 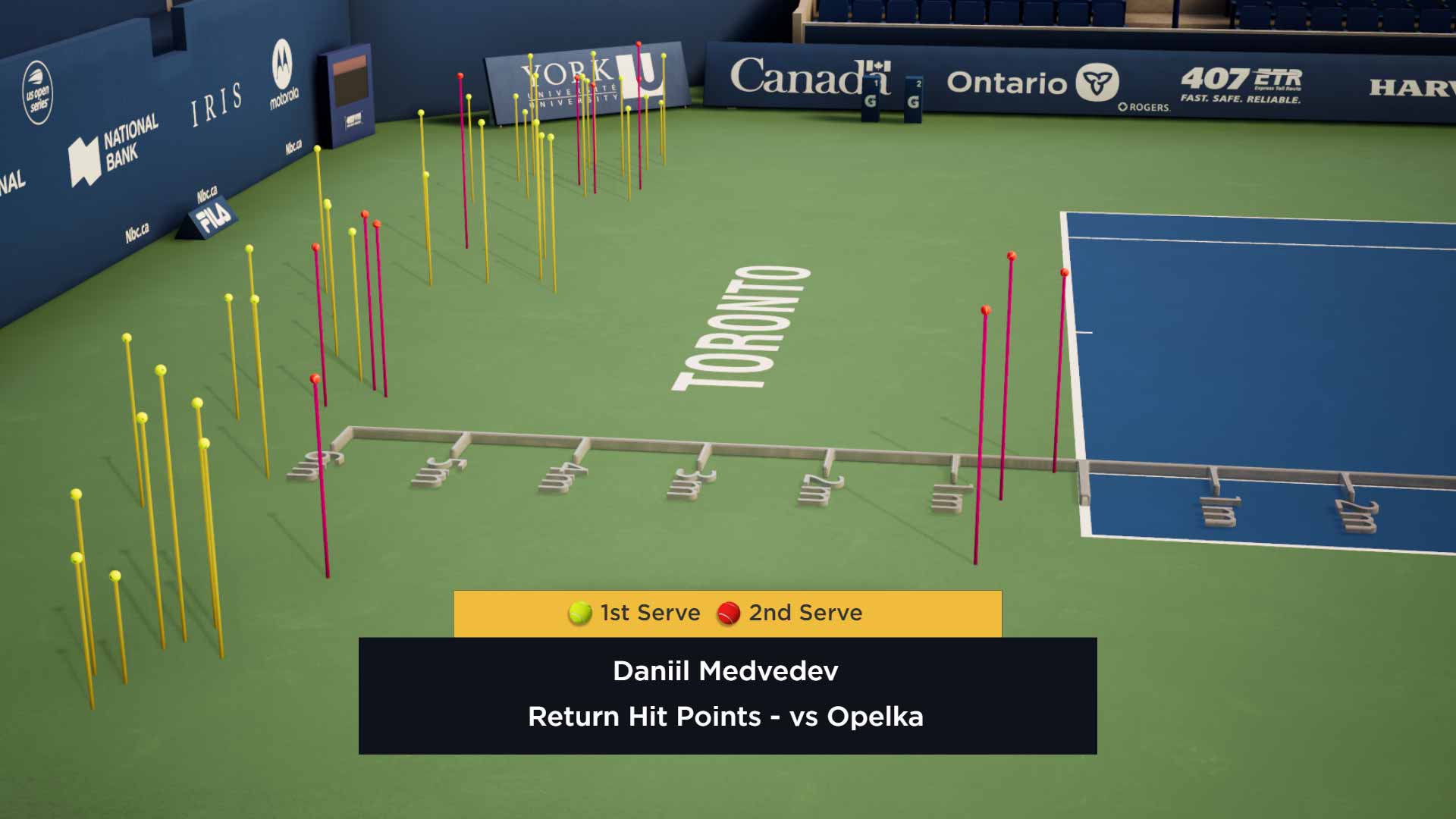 Hawkeye data and visuals courtesy of ATP Media
Medvedev, who was competing in his first Masters 1000 championship match of the year, now holds a 4-1 ATP Head2Head Series lead against Opelka, having also defeated the 23-year-old at Roland Garros, in Miami and Washington.

"When you play Reilly, I think still the biggest factor is how you serve and how you return. Actually, my serve was not on top point today. That's why I had breakpoints to save. That's why it was sometimes close calls on my serve," Medvedev said. "But I was very good on return. I managed to put pressure on him almost nonstop. I think he didn't almost have maybe one or two easy games in the match. That's what made the difference, if we talk about tennis.

"[When] I played my first Masters final, I was happy just to be there playing against Rafa. I always try my best, but something was wrong, so I lost super easy and super fast. It can be the same for everybody. I know for me I think experience is the key... This week he beat some really strong guys to be in the final, so probably next time in the final [we] can wait for a more dangerous Reilly than today."

In a lively start, Opelka exerted early pressure on Medvedev, striking the ball with great power as he stepped inside the baseline to move 0/40 ahead on the Russian’s serve in the fourth game. However, Opelka was unable to take his chances, with Medvedev making five straight first serves to hold. It was then Medvedev who broke first, hammering his backhand down the line past Opelka on return to lead 3-2. Medvedev played consistently as he hit his flat backhand to great effect, causing Opelka problems, who won just 6/13 points at the net to clinch the first set in 38 minutes.

In the second set, Medvedev continued to stand deep behind the baseline during rallies as he soaked up pressure, forcing Opelka into errors. The American struggled to hit through Medvedev, with the Russian winning nine points in a row, breaking again to seize control. Medvedev raised his level in the key moments, fending off another break point at 3-2 when Opelka pushed a drop shot wide. Medvedev dominated the longer rallies in the second set, hitting with great depth as he sealed his victory.

Opelka was competing in his maiden Masters 1000 final on Sunday, having enjoyed a run to the last four at Internazionali BNL d’Italia in Rome in May. The 23-year-old, who recorded his first Top 5 win against World No. 3 Stefanos Tsitsipas in the semi-finals, has won two tour-level titles in New York in 2019 and Delray Beach in 2020.

The World No. 32 was the first American to reach the final at the National Bank Open Presented by Rogers since Mardy Fish in 2011, with Andy Roddick the last American to win the title in Canada in 2003.

”He [Medvedev] was flawless,” Opelka said. “I had one chance to break early. I don't think that would have changed much because he was in so many of my service games. When I hit some big shots, he countered well and it was very tough to disrupt him at all.

“I have learned a lot about myself. I learned that the difference between some matches is so small, you've just really got to be optimistic. I was playing Lloyd Harris a couple days ago on the back court, and the guy was red hot. Returning unbelievably, playing well, not missing a ball. I could have lost there and still had a pretty good week, two good wins, on to the next one.

”But I stayed the course, stayed optimistic, and I came up with some clutch shots. Next thing you know I win that, I beat Roberto Butista Agut, I beat Tsitsipas, [and it] ends up being a longer week. I think this week was a great example of using that optimistic mindset as much as possible. Look [at] what this does for my ranking."