Rafael Nadal in action on Thursday in Turin.

Nadal Sees Off Ruud To End With Win In Turin

Rafael Nadal finished his Nitto ATP Finals campaign with a flourish on Thursday, when the Spaniard downed Casper Ruud 7-5, 7-5 at the prestigious season finale in Turin.

The top seed raised his level in his third round-robin match in Green Group, using the fast conditions to his advantage with some trademark clean ballstriking at the Pala Alpitour. Nadal hit 37 winners to Ruud’s 19 and won 93 per cent (38/41) of points behind his first serve to seal a one-hour, 43-minute victory and round out his 2022 season on a winning note.

“I have been practising well,” a philosophical Nadal said after claiming his first tour-level singles win since September at the US Open. “Just probably not enough matches to be at the level that I needed to be. Not enough confidence, probably, after six tough months. That’s how it is. I accept that the season didn’t end the way that I wanted, [but] at least I finished with a positive victory.

“It’s important, the last official match of the season, so I am happy for that. At the end I am happy about that… I was able to win against a great player.”

The win means Nadal finishes with a 1-2 record at this year’s season finale. The 36-year-old, who this year lifted four tour-level titles including major crowns at the Australian Open and Roland Garros, ends 2022 with a 39-8 tour-level record.

“I can’t ask for more,” said Nadal, who currently sits at No. 2 in the Pepperstone ATP Live Rankings. “2022 has had a tough six months, two Grand Slams, and finishing the year in a high spot in the rankings. So, I can’t complain at all. At my age, to be able to achieve and be competitive means a lot for me.

“For 2023, just let’s try to have the right preparation, work the proper way and start the season with the right energy, the right attitude, to reach the level that I need to be competitive from the beginning. Let’s try it, I am excited about it.”

Nadal had to fend off considerable pressure in the first set against Ruud, who carved out the first two break points of the match at 4-4. The Spaniard’s precise serving helped him recover to hold and he then broke to love to take the opener to the delight of the vocal Pala Alpitour crowd.

The 92-time tour-level champion’s lefty forehand grew increasingly influential in the second set, although Nadal had to stay patient again as Ruud demonstrated the resilience that saw him claim victories against Felix Auger-Aliassime and Taylor Fritz in his opening two matches in Turin. Yet the Spaniard was not to be denied. He made his move in the 12th game, crashing a cross-court backhand winner for 15/40 before completing the win.

Tennis Data Innovation’s INSIGHTS Forehand Quality analysis for the match reveals how dialled in Nadal was behind his forehand. He struck 16 of his winners off that wing en route to victory. 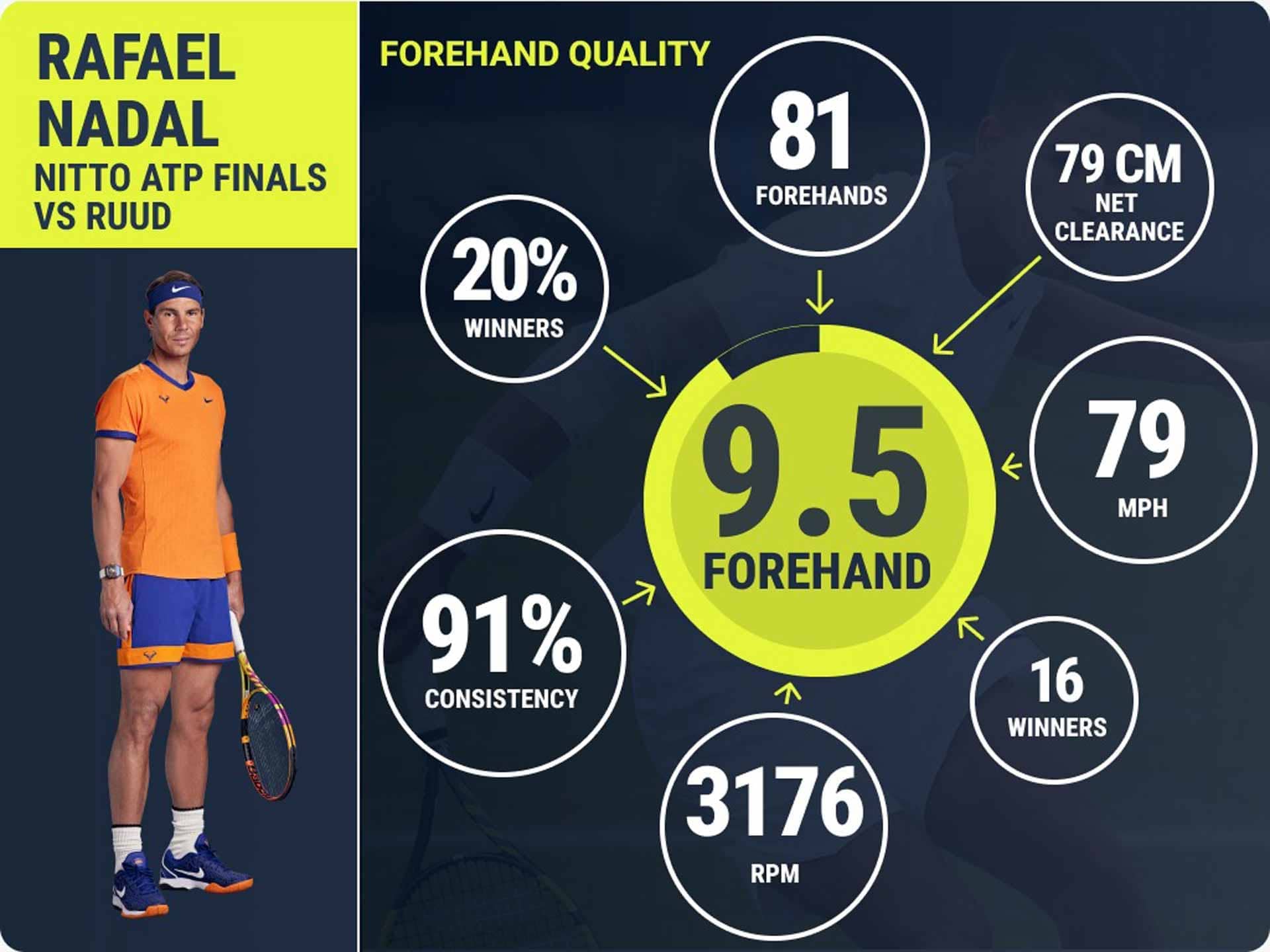 “At the end, the personal satisfaction is more important than any title,” said Nadal, when asked about his desire to finish strongly against Ruud despite having no chance of reaching the semi-finals. “That’s how it is. If I don’t try my best, if I don’t put the best attitude in every single moment, then I will not be able to be back home and stay happy and be calm with myself.”

Despite Thursday’s defeat, Ruud progresses to the semi-finals in Turin for the second consecutive year. Joining the Norwegian in qualifying for the semi-finals from Green Group will be Auger-Aliassime or Fritz. The duo faces off in a winner-takes-all clash in Thursday’s night session at the Pala Alpitour.