Ajla Tomljanovic, Taylor Fritz and Frances Tiafoe at the Netflix premiere on site at Melbourne Park.

ATP/WTA Staff
This article contains:
Here's what we learned after binging on the first five episodes...

Anybody who follows professional tennis with even moderate diligence already knows the basics of what occurred last year. “Break Point,” the Netflix series that becomes available Friday, fills in some of the gaps behind those bare results -- the hows and whys. What’s happening inside the brain of, say, Taylor Fritz or Ajla Tomljanovic or Paula Badosa when they’re under duress?

“It’s so much of a mind game,” Break Point showrunner Kari Lia said. “I hadn’t really appreciated that. And the difference between who wins and who loses is so often about what’s going on in their minds. I found that fascinating.

“And when you watch the show, we really explore that -- what’s going on mentally.”

The interviews, generally speaking, offer a far more honest appraisal of players’ thoughts than we’re accustomed to seeing in post-match press conferences. We see them off the court, celebrating victory, grappling with defeat, eating meals with their families, talking strategy with their coaches, receiving insight from their managers. Combined with play-by-play commentary and observations, primarily from Chris Evert, Paul Annacone, Maria Sharapova and Andy Roddick, Box to Box Films weaves a jaunty, colorful narrative.

This series is the tried-and-true formula for sports coverage: the thrill of victory, the agony of defeat. This will be more of a revelation to the casual fan, unfamiliar with the degree of difficulty the sport presents.

After binging on the five episodes as part of the first drop, here’s what we learned…

Kyrgios the bad boy … or not?

Nick Kyrgios has the reputation as the “bad boy” of men’s tennis and the show relives an outburst during his match against Daniil Medvedev at last year’s Australian Open. But what we learn in the first episode of Break Point reveals that the Australian is relaxed off the court, choosing to spend his time with a close circle of family and friends, enjoying dinners and fun games like anyone else. “He’s not as crazy as everyone thinks he is,” Kyrgios’ girlfriend Costeen Hatzi said.

The turning point
Kyrgios’ Wimbledon upset of Rafael Nadal in 2014 was a turning point not just in Kyrgios’ career, but his life. Then 19, the Australian immediately turns from a mostly anonymous teen on the rise to a player directly in the spotlight. Old footage shows swarms of fans waiting for him in Canberra upon his return. In retrospect, we learn from family members and manager, Daniel Horsfall that his life changed dramatically at that moment – a lot for a teenager to take in: “He was always angry,” said his mother, Norlaila Kyrgios. Kyrgios, his family members and, speak to how life changed after that moment.

Kyrgios’ sidekick
Thanasi Kokkinakis is the Robin to Kyrgios’ Batman. On the court, the pair are clearly relaxed in the early stages of the Australian Open, seemingly aiming to entertain the raucous Melbourne crowd. Off the court, we discover, they are perhaps even closer, attached at the hip, which proved to be an asset on the court. As the Australian Open continued on, the close friends realized they had an opportunity to make their dream come true. They finished the job by lifting their first Grand Slam trophy to the delight of the fans.

The pros are just like us, well mostly
The life of a professional tennis player is often portrayed as glamourous, with the athletes competing on the world’s biggest stages in front of thousands -- and millions across the globe -- hungry to see them play. But we are reminded they are not so different than us -- they just happen to be really good at tennis. In can be easy to forget when you see them on television or from the crowd, but tennis players are human beings. Matteo Berrettini and Ajla Tomljanovic, who were a couple last year, brought the Netflix crew into their hotel room, with clothing and the like strewn across the room. Instead of sitting and talking about tennis, they debated which series or movie to watch on a computer. Also shown in the episode was the emotional side of the sport. As much joy as victories bring, losses sting just as much.

Rafa ‘like a god’
Rafael Nadal and his legendary rivals are portrayed as tennis superheroes. Kyrgios even said of Nadal in the episode, “He’s like a god. As the new generation continues its push to reach the top of the sport, we can see clearly the hurdles in front of them are not only physical, but mental. A player like Berrettini has the tools to overpower anyone in the world. But will he be able to play his best for long enough to take down the best players in history and stamp his own legacy on the sport? In the Australian Open semifinals, by the time he snaps into form, he is down two sets. There is no room for error.

‘You’ve got to be mean’
Tomljanovic explained in this episode that from the age of 7, she had a dream of winning a Grand Slam. The Australian has worked hard throughout her life in pursuit of that goal and has demonstrated clear talent. But former player Chris Evert, who has known her for years, makes a point about Tomljanovic in the episode: “You’re too nice. You’ve got to be a little bitchy out there sometimes. You’ve got to be mean.” It is not enough to be a talented player. It takes a certain mental resolve and a willingness to push the boundaries to reach the very top.

Fritz unwilling to back down
This one deals exclusively with Indian Wells, one of the biggest events on the calendar. Fritz reveals that working closely with his father, Guy, his only coach before he turned professional, “caused friction.” But “in the end, he knew I’d be thankful for it all -- and I am.” Paul Annacone, one of Taylor Fritz’s coaches who previously worked with Pete Sampras and Roger Federer, ominously foreshadows the ending of the episode, when he says, “Taylor Fritz is one of the toughest, most strong-willed players I’ve ever been around. That’s probably his biggest asset -- it’s also probably his biggest liability.”

Did we mention Fritz’s competitive spirit?
After Fritz suffers an ankle injury in the practice before the final, there are spirited discussions with his team about whether he should play. Annacone and Taylor’s father, Guy, argue strenuously that he should pull out, rather than take a numbing injection and risk a career-threatening injury. We begin to see what a competitor Fritz is. He insists on doing anything he can to play the most significant match of his life. Ultimately, he plays -- and beats Rafael Nadal, ending his 20-0 run to start the year. For Fritz, it was his first ATP Tour Masters 1000 title. 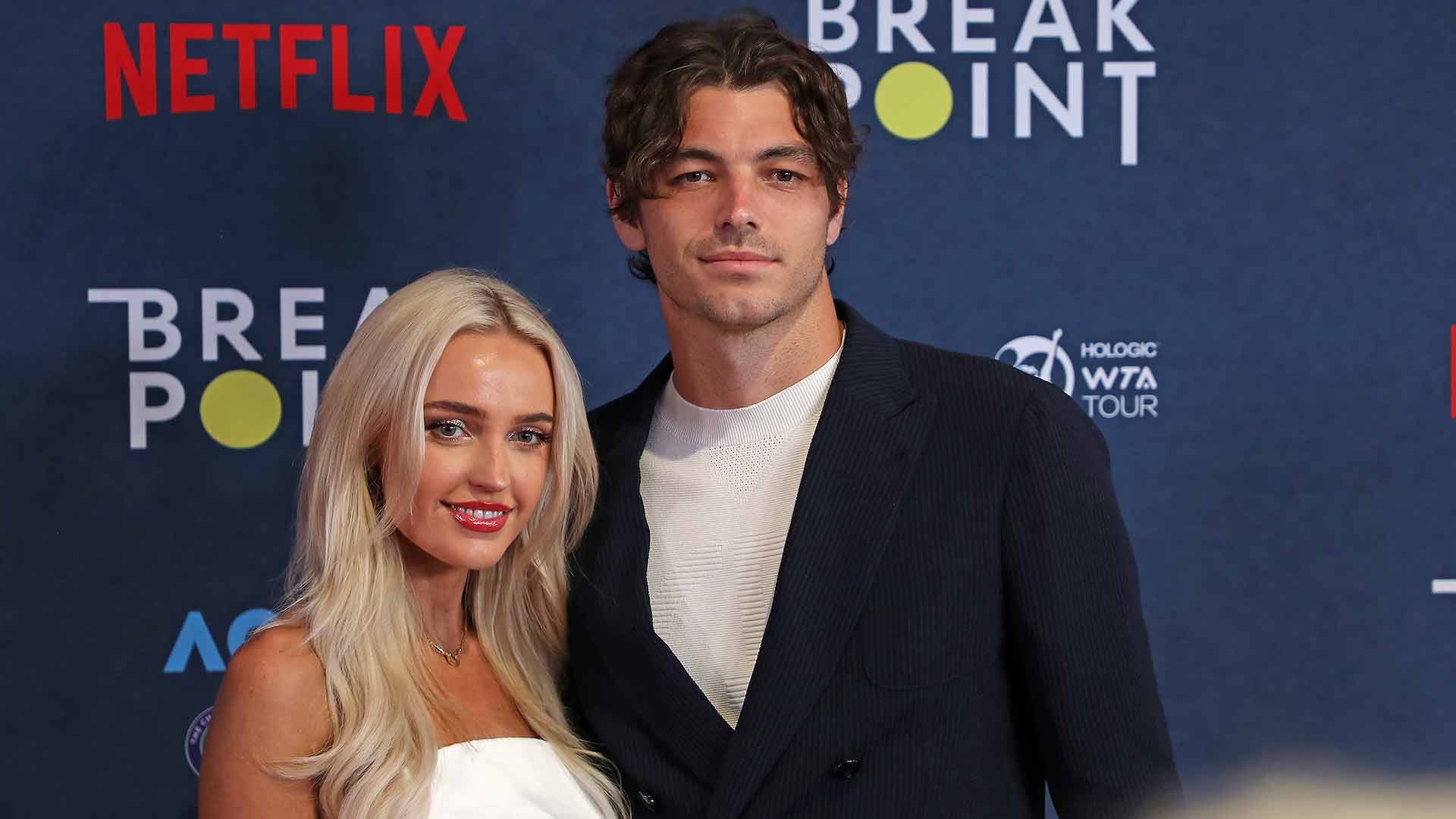 Sakkari not lacking in her caffeine intake
Meanwhile, Maria Sakkari reveals how devastating her 2021 Roland Garros semifinal loss to Barbora Krejcikova was: “I didn’t know how to handle it. I couldn’t sleep for three days. I told my coaches I wanted to retire from tennis. I retired for four days.” In another sequence she reveals another shocker. Into her sixth espresso of the day, she admits she drinks more coffee than any other WTA player. And there’s this from friend Ajla Tomljanovic, regarding one of the most physically imposing players: “On the court, she’s so intense. Off the court, she’s a teddy bear.”

Badosa tells it like it is
The WTA is featured exclusively in this look at the WTA Madrid 1000. Paula Badosa, as always, is an open book -- but her soundbites are exceptionally poignant. “This sport is a drug,” she said. “It’s super addictive. The wins and the feeling you get, the adrenaline it gives you -- you’re chasing that all the time.” The defending Madrid champion, down a set and 4-0 to

Simona Halep in her home tournament, added, “I just want to leave the court. I have so many negative voices in my head: `You’re a bad player, you’re not able to do this.’ It’s very tough to turn it off.”

Jabeur quickly rises into the mainstream conversation
Tunisia’s Ons Jabeur has made all kinds of history, but we begin to see how difficult it was to achieve. For example, it was a risk when her husband, Karim Kamoun, became her fitness trainer in 2017 or when Issam Jellali became her coach. They are both Tunisians, like Jabeur herself, far from the mainstream tennis world. There’s some terrific bantering between Ons and her husband on how to properly throw a medicine ball.

Badosa’s needed help off the court
After winning the 2017 junior title at Roland Garros, Badosa suffered from depression and sought professional help. “I’m living a dream,” Badosa said, “but at the same time it’s not easy to manage with all the expectations, all the pressure.” Badosa struggled as a young player on the WTA Tour, but slowly her ranking rose. She dipped into the Top 100 in 2019, then jumped from No.70 in 2020 -- to a year-end No.8 in 2021. She was only 23 years old. “A lot of people don’t talk about it,” she said, “because they think they’re going to be weaker. But I think it’s totally the opposite.”

Felix a longtime prodigy on the rise
Most of the tennis world was introduced to Felix Auger-Aliassime when he won an ATP Challenger Tour match at 14 years old. His mother, Marie Auger, said she cried when her son traveled on a plane by himself to a tournament for the first time at 9. With the spotlight on him for so many years, it is noteworthy how humble Auger-Aliassime remains. The Canadian said in the episode that he wants to be told things he doesn’t want to hear to continue his tennis evolution. That has paid dividends for the rising star.

Roddick has high praise for Ruud
Former World No. 1 Andy Roddick is not one to exaggerate, so when the American praised Casper Ruud, it is worth paying attention to. “I love Casper Ruud. He is one of the people who hasn’t gotten enough hype,” Roddick said of the eventual Roland Garros finalist. “He’s not the person who brings attention to himself. He’s not a self-promoter.” Casper’s father, former World No. 39 Christian Ruud, revealed his son had a poster of Nadal in his room as a kid. While training at the Rafa Nadal Academy by Movistar, Ruud benefitted from training sessions with the Spaniard and plenty of advice from the icon. Does the Norwegian have what it takes to follow in his idol’s footsteps?

What Uncle Toni controversy?
How Auger-Aliassime handled the Uncle Toni controversy at Roland Garros last year was just as impressive as the Canadian’s tennis. Toni Nadal, Rafael Nadal’s uncle, is a member of the Canadian’s coaching team. But before their fourth-round matchup, Uncle Toni did interviews making clear who he is was rooting for in the match. “To tell the truth, I want my nephew to win. He’s my nephew and more than a nephew to me,” he said. Uncle Toni sat in a neutral section, and during the match he left the stadium, finding it difficult to watch. Many players would question his loyalty, but Auger-Aliassime repeatedly explained that he understood the predicament and worried more about playing his best, which helped him push the 22-time Grand Slam winner to five sets.