Zhang Zhizhen is the No. 1 player from China in the FedEx ATP Rankings.

Carrying The Weight Of National History, Zhang Says 'It's Just The Beginning'

Andrew Eichenholz
This article contains:
The Chinese No. 1 is making his major main draw debut at Wimbledon

Zhang Zhizhen has the weight of a country — China, with a population of 1.4 billion — on his shoulders. But if you talk to the 24-year-old, you would never know it.

On Thursday, Zhang became the first Chinese man in the Open Era to qualify for the main draw at Wimbledon. It has been 62 years since Chu Chen Hau and Mei Fu Chi competed in The Championships in 1959. Yet the No. 178 player in the FedEx ATP Rankings is approaching this massive moment with a clear calm.

“It’s not the last tournament for me,” Zhang said. “I didn’t finish the tournament yet. It’s just the beginning, it just started. [I need to] be calm, be easy.”

Zhang is not just internalising his emotions because of the magnitude of this occasion. He is always easygoing.

"My full name is too hard for people to say, so I just tell them to say whatever they want to call me and I will respond,” Zhang told ATPTour.com. “Then it became 'ZZZ' because there are three Zs in my name. It is much easier for people outside of China to say. And it sounds cool. Triple-Z. I also like to sleep, so 'ZZZ' is perfect." 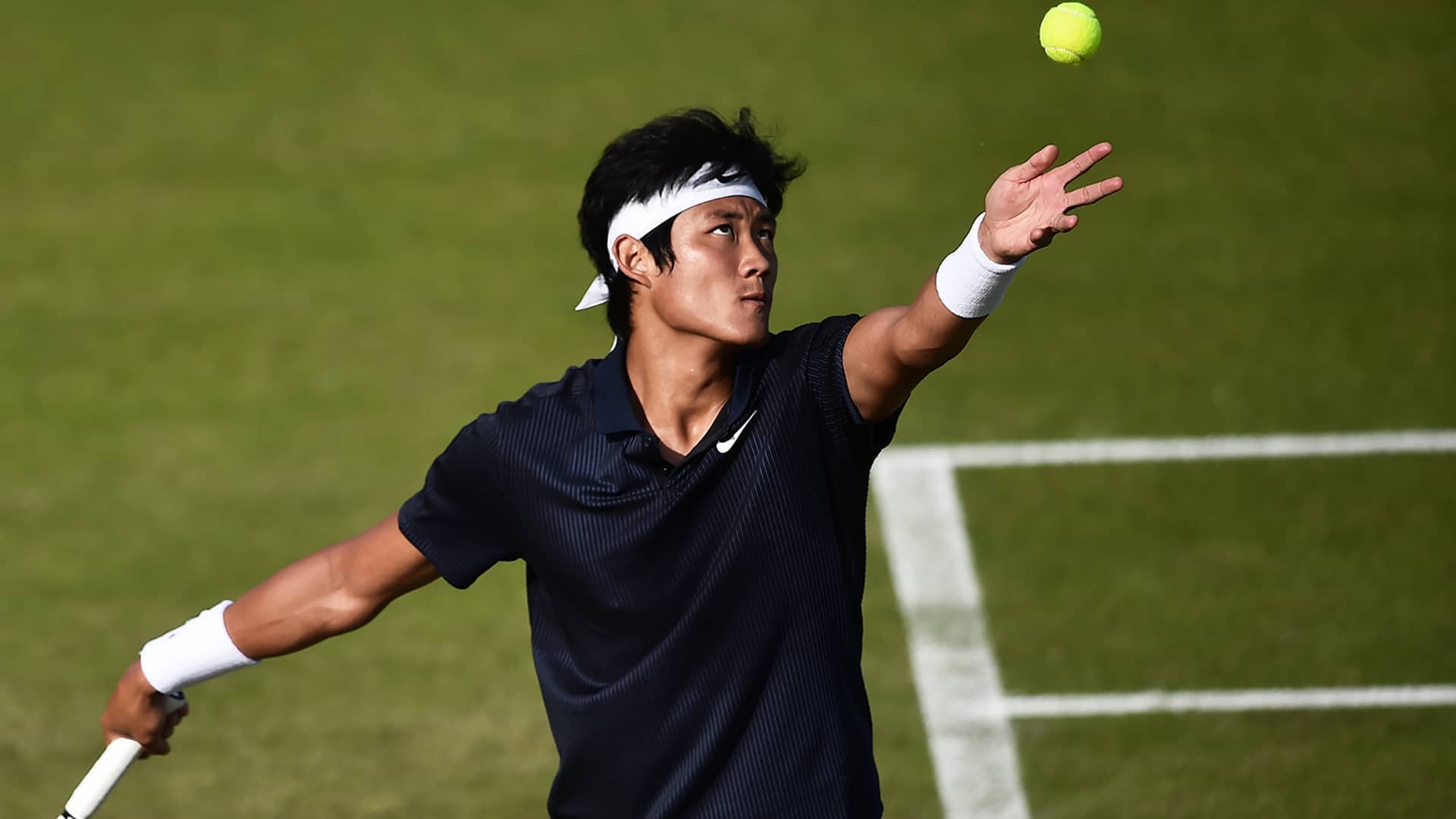 Photo Credit: Nathan Stirk/Getty Images for LTA
The Shanghai-native comes from an athletic background. His father, Zhang WeiHua, was a soccer player for Shanghai ShenHua. His mother, Qin Wei, was a shooter. But today’s No. 1 men’s tennis player from China did not follow in his parents’ footsteps.

“My father gave me a choice: studying, swimming [or] tennis,” Zhang recalled. “Studying is too boring and it costs too much. Swimming, the coaches are really strong, really tough. I was so scared of the swimming coach. And tennis was fun. The coach was relaxed… I was like, ‘Let’s go [play] tennis.’”

Zhang was four when he was first introduced to the sport, and looking back he says, “I had no idea what tennis was.” At six, he chose to focus on tennis over swimming and any other sport, even though soccer runs in his blood.

“My father was a soccer player, but my father didn’t want me to play soccer. The reason is there are 11 players on the [field]. You are not deciding [the game for] the whole team, so it’s tough,” Zhang said. “He wanted me to play something that I can decide how the match goes. Tennis I can decide everything. I [can] decide to lose, or decide to win. It’s all about me, it’s not about the other 10 people.”

You May Also Like: A Welcome Return Home For Zhang Zhizhen, China's Top Player

The Chinese star impressed early, qualifying for his first ATP Tour main draw at the age of 18 in 2015, when he reached the second round in Shenzhen. The following week, he earned his first Top 100 victory in Beijing.

Zhang’s training has taken him around the world to countries including Spain, the United States, France, Italy and Croatia. When he was an 18-year-old,  Zhang trained at the same academy in Nice, France, as current World No. 2 Daniil Medvedev. They practised together and became friends, with the Russian winning “65 to 70” per cent of the time. In qualifying for an ATP 250 event in Nice in 2016, Medvedev beat Zhang in a final-set tie-break.

“I lost to him in the third set, it was so sad,” Zhang said. “Then after he just went up like ‘whoosh’.”

Meanwhile, Zhang fell as low as World No. 894 in May 2017. But he has shown moments of brilliance, too. Towards the end of 2019, the home favourite claimed his first two ATP Challenger Tour titles in China. Between those triumphs, he won main draw matches at ATP Tour events in Zhuhai and Beijing. 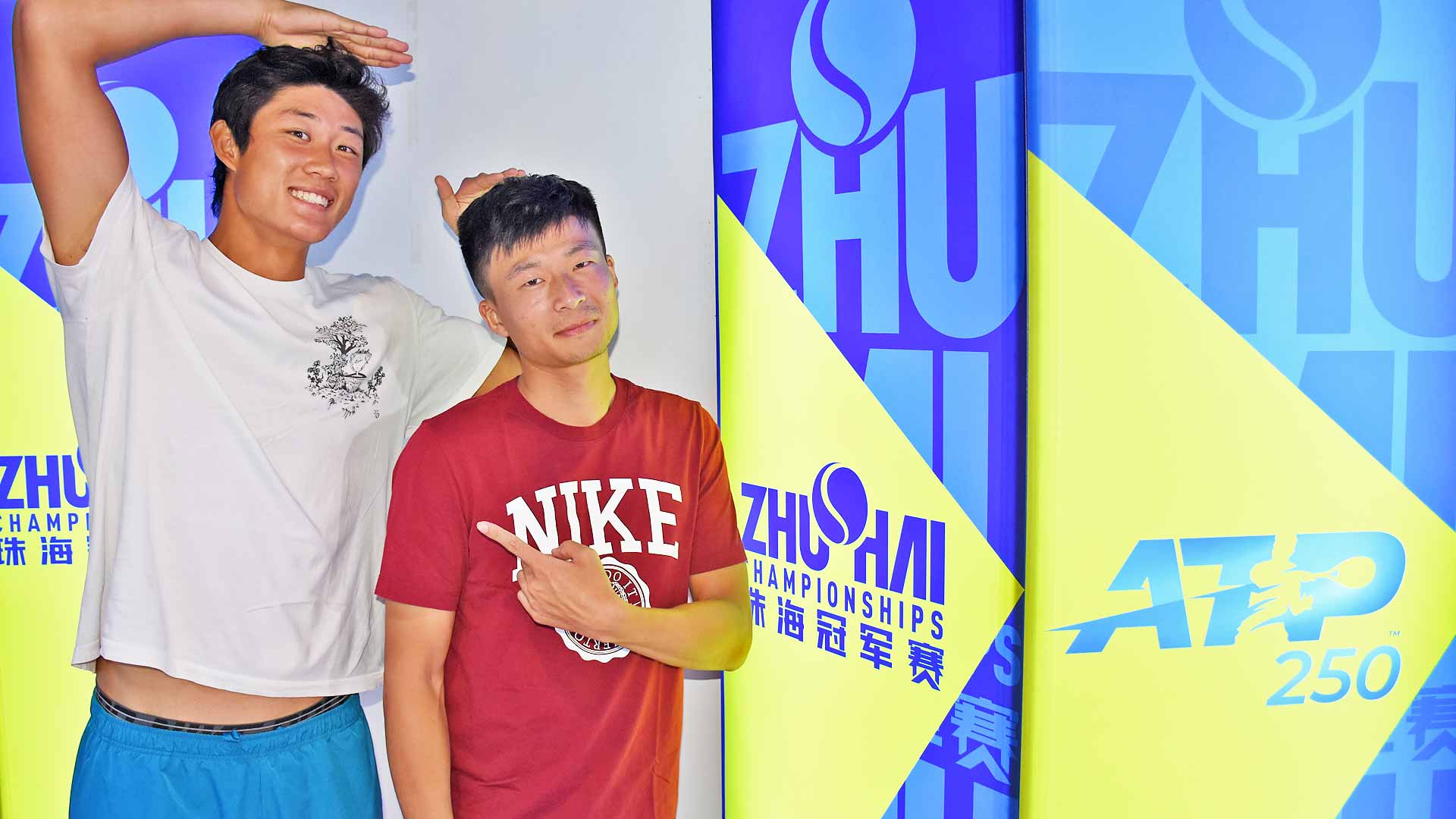 Photo Credit: Andrew Eichenholz/ATP Tour
In Zhuhai that year, Zhang and good friend Wu Di became the first Chinese pair to advance to the second round of a tour-level event since Shenzhen in 2015. Wu is not surprised by Zhang’s success at Wimbledon.

“I believe he only will be getting better, because he already showed some high quality tennis a couple years ago,” Wu said. “He is talented and has a good understanding of tennis. Most people thought players from Mainland China are not comfortable on grass. Zhizhen showed how much he has grown in the past few years and I hope people can see more of him in the future.“

Last year, Zhang reached his career-high FedEx ATP Ranking of No. 136 in February, before play was suspended for more than five months due to the COVID-19 pandemic. And now here in London, on his fourth attempt to qualify for a Grand Slam — and his first at The Championships — he has broken through to become the first Chinese man in the Open Era to reach the main draw at a major outside of the Australian Open. According to his countryman Li Zhe, the World No. 268, this was a long time coming.

"I think Chinese players should have made this breakthrough a long time ago . For me, Zhizhen’s performance in Wimbledon is not surprising and I believe he will break more records for Chinese male tennis,” Li said. “I am truly happy for him. I think people should have more faith in all the Chinese players because we are all capable to do this, but [have had a] lack of opportunities.”

Zhang is well aware of the success of Chinese women including Li Na, although he did not watch when she won Roland Garros in 2011 and the Australian Open in 2014. To the 24-year-old, it is important to not try to reach those heights overnight.

“Women [from China] always had good results from many, many, many, many years ago. They had a Grand Slam already in singles, doubles,” Zhang said. “The men, we are not even close to the [Top] 100. That’s quite different, so [we need to go] step by step, maybe. It cannot be [in] one day or one week [that] we can figure this out.

Zhang, who idolised Roger Federer — he calls the Swiss legend “the perfect one” — is now in the same Grand Slam draw as the 20-time major champion. The qualifier has received a lot of messages from friends and he is ready to make his historic debut on Monday at SW19 against fellow qualifier Antoine Hoang. However, he is treating it no differently than his other matches.

“Nothing special,” Zhang said. “I would say keep it as a normal one, as a normal match. It is a different match, its a little bit special. But I will prepare like normal.”