Boris Becker: From Wunderkind To World No. 1

In the latest profile of a series on the 26 players to rise to No. 1 in the FedEx ATP Rankings, ATPTour.com looks back on the career of Boris Becker. View Full List.

At World No. 1
Becker, nicknamed ‘Boom Boom’, became the ninth player to reach World No. 1 in the FedEx ATP Rankings on 28 January 1991, after capturing the Australian Open title. The German spent an initial three weeks at the summit, at a time when he and his great rival, Stefan Edberg, dominated. Following his run to the 1991 Wimbledon final, Becker returned for a further nine weeks at the top of the sport on 8 July 1991. As World No. 1, Becker won 12 of 15 matches and reached one championship match, losing to Pete Sampras in the Indianapolis final.

Grand Slam Highlights
Becker clinched six major championship trophies, including three Wimbledon titles. In 1985, as a 17-year-old ‘Wunderkind’, he flung himself across the grass of Centre Court to become the youngest man — and first unseeded player — to capture the Gentlemen’s Singles trophy at The Championships. The powerful German reached seven finals at Wimbledon (3-4) and called the sport’s cathedral — Centre Court — “his living room”. Competing as a two-time defending champion in 1987, Becker fell to Peter Doohan in the second round at Wimbledon, famously remarking afterwards, “I haven't lost a war. No one got killed. I just lost a tennis match.” Becker won his third title at SW19 in 1989. The German also claimed two Australian Open trophies, beating Ivan Lendl and Michael Chang to lift the trophy in 1991 and 1996, respectively. Becker reached the semi-finals or better at the US Open four times, clinching the 1989 crown with a four-set win against World No. 1 Lendl. Between 1987 and 1991, Becker advanced to the semi-finals at Roland Garros on three occasions. 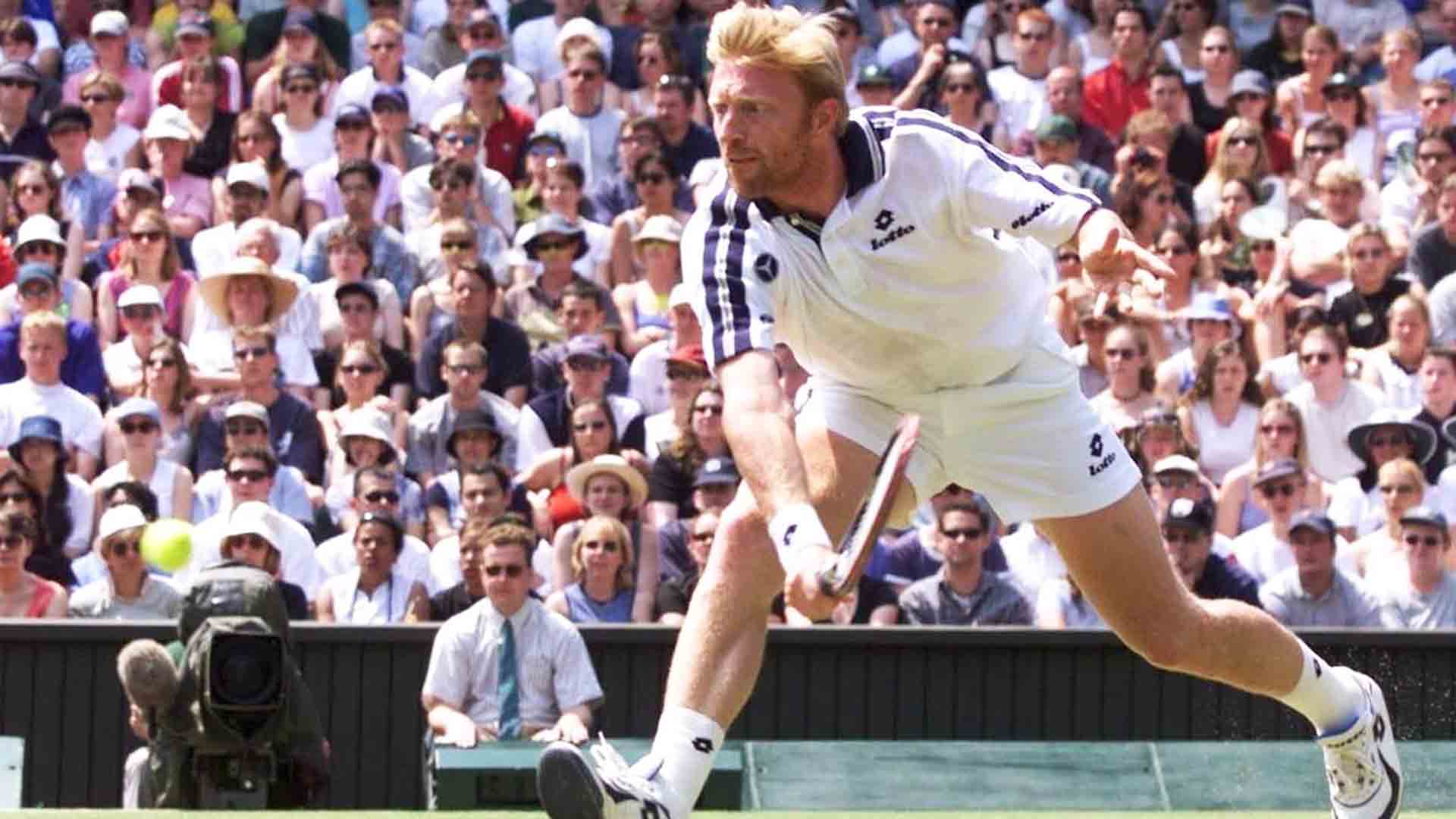 Nitto ATP Finals Highlights
Becker made 11 appearances at the Nitto ATP Finals from 1986, when the event was held at Madison Square Garden in New York, to 1996 in Hanover. He triumphed at the elite eight-man event for the first time in 1988, when he won a fifth-set tie-break against Ivan Lendl in the final. "Beating Ivan in the [1988] final gave me even more satisfaction. He was incredibly dominant and an inspiration,” said Becker. “I was playing some of the very best tennis of my life. Physically, it was one of the hardest matches of my life.” Becker also captured the trophy in 1992 and 1995, beating Jim Courier and Michael Chang, respectively. Becker was a runner-up on five occasions (1985-‘86, '89, '94 and '96). In 1996, Becker and Sampras contested one of the finest finals in ATP Tour history over five sets. He finished his career with a 36-13 record at the tournament.

Tour Highlights
From his very first ATP Tour title in June 1985 at The Queen’s Club, a precursor to what would happen at Wimbledon three weeks later, Becker amassed 49 singles trophies from 77 finals. Prior to the establishment of the ATP Tour in 1990, Becker had a winning rate of 24-9 in finals. In the 1990s, Becker won five Super 9s from 11 finals [now named ATP Masters 1000s], including three trophies in Stockholm. Stockholm was one of three events that Becker won on four occasions (also 1988), alongside The Queen’s Club and Milan. He also won the 1996 Grand Slam Cup and the doubles gold medal at the 1992 Barcelona Olympics with compatriot Michael Stich.

Biggest Rivalries
Across 35 ATP Head2Head encounters between 1984 and 1996, including three straight Wimbledon finals (1988-1990), Becker and Edberg pitted power against finesse. Becker won 25 of their meetings and had the edge 11-5 in finals, but Edberg claimed victory in two of their Wimbledon championship matches (1988 and 1990) and their 1989 Roland Garros semi-final. “He was my toughest rival… We had three consecutive Wimbledon finals, we had the Davis Cup final twice. Pretty much on all the big stages, we played and we had tough matches," said Becker. “He was a tough competitor, but he was a nice guy. I think we have a tremendous amount of respect for each other. There wasn’t a moment that I could say, ‘I don’t like this guy.’ It was tough on the court, I wish I would have won more, but he is a good guy.”

Legacy
Across 12 sparkling years, Becker helped elevate the sport to new heights and the era of superstar tennis, finishing in the year-end Top 10 of the FedEx ATP Rankings on 11 occasions (1985-‘92, '94-‘96). Becker introduced his brand of power tennis to the sport with his dramatic arrival in 1985 and, together with Ivan Lendl, the German took athleticism in the sport to new levels. He once said, “Tennis is a psychological sport, you have to keep a clear head. That is why I stopped playing.” As one of the sport’s greatest fast-court players, he is best remembered for his trademark diving volleys, heavy serve and forehand. Never far from the spotlight as a player or in retirement, the 2003 International Tennis Hall of Fame inductee was coach to current World No. 1 Novak Djokovic between 2014 and 2016, helping the Serbian to capture 25 tour-level trophies, including six majors and 14 Masters 1000 crowns. During this period, Djokovic also became only the third man in history to hold all four Grand Slam trophies at the same time.

Memorable Moment
After falling to Mats Wilander in the second round at Roland Garros in 1985, Becker quickly turned his attention to what would be a life-changing grass-court season. The 17-year-old travelled to Beckenham, where he gained valuable match practice with a run to quarter-finals. Bidding to capture his first ATP Tour trophy, Becker then made the short trip across London to The Queen’s Club. The 6’3” right-hander beat Pat Cash, Paul McNamee and Johan Kriek in consecutive matches to lift the trophy and crack the Top 20 in the FedEx ATP Rankings for the first time in his career. In his second appearance at SW19, Becker-mania spread as the unseeded German battled through several close encounters. The 17-year-old won back-to-back five-set encounters against Joakim Nystrom and Tim Mayotte, before overcoming Henri Leconte and Anders Jarryd in four sets to reach his maiden Grand Slam final against Kevin Curren. After three hours and 18 minutes of action on Centre Court, Becker fired a huge serve out wide to complete a 6-3, 6-7(4), 7-6(3), 6-4 victory against the American. "I only experienced nerves at 5-4 in the fourth set, when I was shaking and sweating as I sat in my chair prior to serving," said Becker. "I could barely toss the ball up and hit two double faults, including one at 40/15. When I won, it was all a blur. It was only later that I realised what I had achieved." To this day, Becker is the youngest Gentlemen’s singles champion in the history of The Championships.

Edberg on Becker
"I think the rivalry with Boris has been very good for both of us, because that's really what's important in tennis. We've been fighting through Wimbledon and we've been fighting for the No. 1 spot and looking at each other's results. Connors and Borg and McEnroe and Lendl had this thing going, and Boris and I had it going for a little while."

Becker on Becker
"I am most known for my first Wimbledon title, because that put me on the map. For me, personally, my second Wimbledon title was the most important one because it confirmed my position in the world of tennis. Most importantly, for myself, after [my second title at] Wimbledon I felt like I belonged."

Broadcaster/Journalist Graeme Agars
Boris Becker burst onto the tennis scene as a flamboyant 17-year-old, stunning the game’s establishment with an outrageous victory at Wimbledon in 1985. He rode two key assets to success at the All England Club that year: a powerful and well-placed serve that earned him the nickname “Boom Boom” and some of the most acrobatic performances ever seen at the net.

Becker spent almost as much time horizontal to the court as he did perpendicular, with some amazing lunges that could almost have qualified him for an Olympic diving spot. That hugely enjoyable style saw him win three times at Wimbledon, making the most famed center court in the game his own “back yard” during the latter half of the ‘80s.

Combined with the stellar career of fellow German Steffi Graf, Becker saw Germany rise to the top of the tennis world. He wore his heart on his sleeve when he played, making him a magnetic character to watch and no matter where he played, he drew a large and appreciative crowd.

He was also a photographer’s favorite, a compliment he returned when he surprisingly gave his winning racquet to a courtside snapper after he won the US Open in 1989.