Rafael Nadal overcame a mid-match surge from Novak Djokovic and raised his level in the deciding set to triumph 7-5, 1-6, 6-3 on Sunday and lift his 10th trophy at the Internazionali BNL d’Italia.

In the 57th meeting of the ATP Tour’s most prolific rivalry, top seed Djokovic was facing second seed Nadal for the ninth time at the Foro Italico (Nadal leads 6-3). Nadal improved to 4-2 in Rome finals against Djokovic with the victory, and brought his ATP Head2Head record against the Serbian to 28-29 overall.

You May Also Like: Djokovic v Nadal: The Complete Rivalry

"It's a very satisfying [victory]," Nadal said in his post-match press conference. "It's amazing [to] have the trophy with me again one more time here in Rome. The 10th, I really wanted this 10th here in Rome. It was one of the first important titles that I won in my career.

"After achieving 10 in Roland Garros, 10 in Monte-Carlo, 10 in Barcelona, I really wanted this one."

The victory also earned Nadal a 36th ATP Masters 1000 crown, equalling Djokovic’s record since the series was established in 1990.

With his 88th tour-level title, Nadal surged into the sixth position in the FedEx ATP Race to Turin. He sits just 10 points behind Daniil Medvedev and 30 points behind Alexander Zverev, who holds the fourth position. Djokovic overtook Andrey Rublev to sit in second position, turning up the heat on Race leader Stefanos Tsitsipas. Only 190 points separate Djokovic and Rolex Monte-Carlo Masters champion Tsitsipas.

Djokovic spent nearly five hours on court (4hrs, 56 mins) yesterday after winning his rain-delayed quarter-final against Stefanos Tsitsipas and a semi-final epic against Lorenzo Sonego to reach the final, while Nadal needed an hour and a half to take down Reilly Opelka.

Djokovic, who was bidding to record his first win on clay against the Spaniard since the 2016 Rome quarter-finals, showed little signs of fatigue in the opening set against Nadal. The Serbian raced out to a 2-0 lead by staying aggressive and keeping the points short. But Nadal broke straight back, and his forehand speed steadily climbed as the match unfolded, earning 15 of his 21 winners in the first set and 26 of 37 overall. 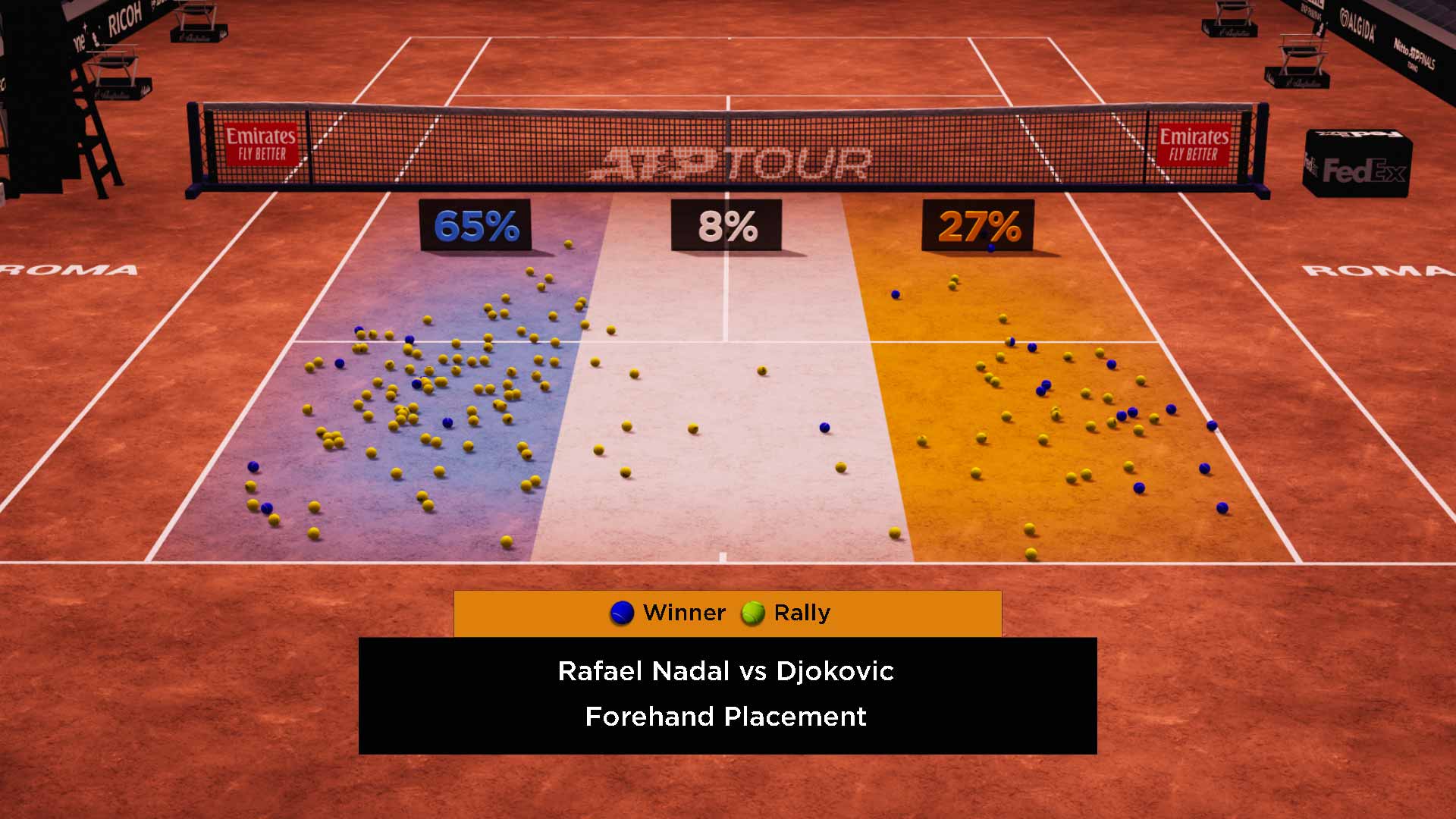 "I think I have been playing better and better with my forehand the past couple of weeks, getting to the confidence point," Nadal said. "[There were] moments [that] I could change more times down the line than what I did... But the positive thing is the winners and the solutions with my forehand have been much better than the past couple of weeks.

"That's a huge improvement for me, [a] very important shot. Especially on clay it's gives me confidence."

Nadal stayed patient to claim the decisive break late in the set, taking advantage of a shaky service game from the Serbian at 5-5 to claim the lead, sealing the set after an hour and 15 minutes.

But a dip in Nadal’s intensity gave the Australian Open champion the opening he needed at the start of the second set. The Spaniard held a break point at 1-1 for an early edge, but Djokovic’s big first serves bailed him out of trouble. The World No. 1 let out a roar, and the comeback was on as he applied the pressure on Nadal with deep returns to claim a 3-1 lead.

Djokovic reeled off the last five games in a row, and arrived at set point with his fifth ace of the match. The Serbian outlasted Nadal at the baseline, earning a backhand error from the Spaniard to take the second set in 43 minutes.

The nine-time Rome champion overcame a crucial stage of the final set at 2-2, where Djokovic fought his way to two break points. Nadal held firm and raised his level in the next game, painting the lines with forehand winners to break to love for a 4-2 lead. He converted his second championship point after Djokovic sent a backhand long, sealing the victory after two hours and 49 minutes.

Did You Know?
Rafael Nadal has now won 10 or more tour-level titles at four different events. In addition to his 10th Rome title, Nadal owns 13 Roland Garros trophies, 12 in Barcelona and 11 in Monte-Carlo – setting tournament records at each one.