In the winter of 1974, a handsome 18-year-old Swede with a golden mane of long, frizzy locks turned up at the Kooyong Lawn Tennis Club in Melbourne, Australia to play in the $100,000 Commercial Union Grand Prix Masters. At the time, Sweden wasn’t exactly known for producing tennis talent.

A writer from Sports Illustrated opined that year that Sweden was “a country with a meagre athletic history save for hearty, bundled-up Vikings in snowshoes”. But this teen sensation who had qualified for the sport’s elite, eight-man season-ending Masters tournament was already an international sensation, a rock star whose instrument was a wooden Bancroft racquet. He was 18-years-old but his resume already included eight titles, including a major at Roland Garros. The teen sensation’s list of early victims read like a who’s who in the sport: Laver, Vilas, Nastase, Ashe, (Stan) Smith, Rosewall, Panatta, Connors, Kodes, Orantes and more.

The kid hadn’t qualified for the Masters based on his good looks, or the fact that teenage girls mobbed him like he was the fifth member of the Beatles at Wimbledon that summer. He came into his first Masters with a ridiculous 93 ATP tour wins that season. His first name, Björn, means bear in Swedish; his last, Borg, means castle. His middle name, Rune, was a nod to his father, a clothing salesperson who won a tennis racquet in a Ping-Pong tournament and gave it to his only child. It was too heavy, so young Björn used two hands to hit the ball against their garage door for hours and hours at a time.

At 13, young Björn once stayed on the court for more than 11 hours, winning nine matches in a single day. By 17, he had already earned enough money in the sport to buy his parents a summer house and a small grocery store they ran in the industrial town of Soldertalje. All this time, he was building toward qualifying for his first Masters, which meant the world to him.

The Swedish legend, now a youthful 64 if ever there was one, recently participated in a Zoom call with Roger Federer and Tim Henman, where he reflected on that first Masters and several others he remembers fondly. “During my time, the most important thing every year was to qualify for the ATP Finals, everyone talked about it week after week,” said Borg, who looked golden bronze after a holiday in Egypt, with his impeccably coiffed mane of neatly-parted grey hair, and a smart V-neck sweater. 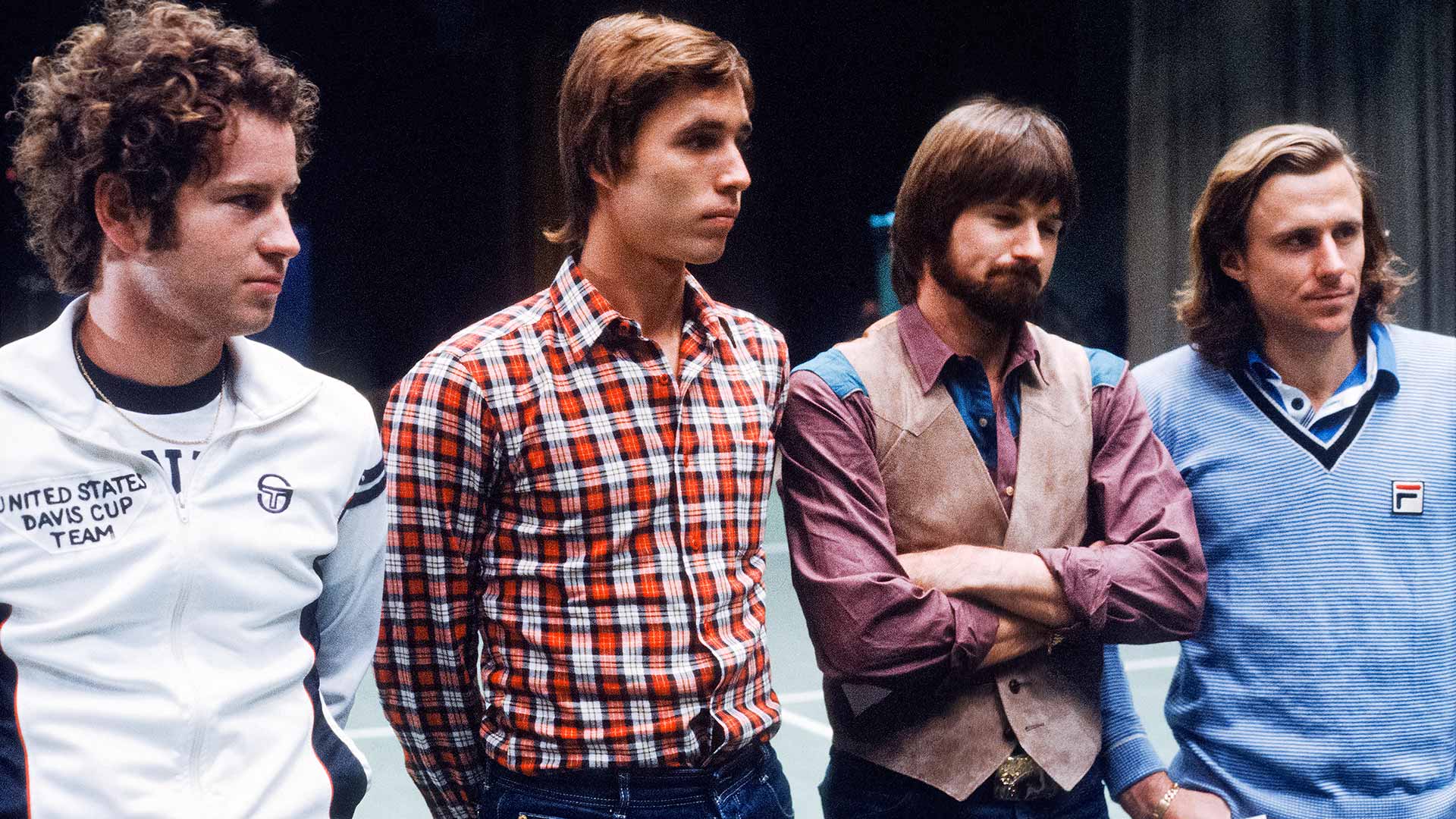 “They had this huge board with our names and (ATP) points at each tournament. We talked about it the whole week, month after month. To qualify was the most important thing. I didn’t do too well (my first year at the Masters), but I was happy to be there. It was a really big thing then as it is now.”

Borg failed to make it out of the round-robin phase of that first Masters, but he made a deep impression on the Aussie crowds, New Zealnder Onny Parun 10-8 in the third, and dropping a tough match to John Newcombe, then ranked No. 2, in a pair of tie-breaks. But bigger and better things were still to come for the kid from the suburbs of Stockholm.

The following year, 1975, the tournament moved to his hometown, and he beat Arthur Ashe to face Ilie Nastase in the final, which he lost in straight sets. “Playing in your home country is a lot of pressure but I was happy the ATP Finals moved to Sweden,” Borg told Henman. “I lost in the final to Nastase but it was a big thing (to make it that far).”

After a year in Houston, the event moved to Madison Square Garden in New York for the next 13 years. “It was a brilliant move to play there for many years,” Borg said. He played some of the best tennis of his career in that arena against his greatest rivals—McEnroe, Connors, Vilas, and Lendl. In 1978, Borg made it to the final of the tournament for the first time, losing to Connors in a hard fought three-setter.

Two years later, he won the event for the first time. Sports Illustrated called it “the best and the brightest and the most exciting tennis tournament anybody ever saw”. Borg beat Connors in the round robin and McEnroe in the semi-finals, both in riveting third set tie-breaks. Three other matches that week were also decided in third set tie-breaks.

“Those five matches that went to tie-breaks, it was unbelievable tennis,” Borg recalled. “It was a great promotion for the ATP Finals— it helped tennis a lot and it helped us a lot too.”

Vitas Gerulaitis snapped a 16-match losing streak against Connors in the semi-finals, inspiring one of the best quotes in the history of the sport: “Nobody beats Vitas Gerulaitis 17 times in a row,” he said. But Borg dismantled him 6-2, 6-2 in the final and did in fact end up beating Vitas 17 straight, finishing his career with a perfect 17-0 record against the feisty New Yorker. But aside from winning the tournament, Borg also lost his cool on court for the first time since his junior days.

You May Also Like: When McEnroe, Lendl, Connors & Borg Were The Rock Stars Of Madison Square Garden

At 3-all in the third set tie-break, Borg's forehand pass was signalled good by the linesman, but Umpire Mike Lugg overruled the call, giving McEnroe the point. With the crowd booing and whistling, Borg pleaded with Lugg to ask the linesman about the call. “I got very upset,” Borg recalled. “I went to the umpire, I was pretty nice but I wanted some answers. He didn’t give me the right answer and I got a warning and then two penalty points. That was the only time in my career that I got warnings and penalties. But I won the match anyways.”

Borg recalled on the Zoom call why this episode was so unusual and memorable for him. “I was suspended for three months when I was 13 for bad behaviour and I didn’t open my mouth again because I wanted to play tennis, I didn’t want to be suspended again,” he said. “As a player you get so frustrated, you want to scream but you have to keep it inside. I think that was probably the strongest point of my game to do that. The other players have no idea what your emotion is; you just keep playing.”

Borg followed up his Masters win by winning the event again in 1981, this time beating John McEnroe, Jose Luis-Clerc, Jimmy Connors and then Ivan Lendl in the final. “I was happy to win twice and those victories mean a lot for me because it’s the best eight players in the world and it’s tough to qualify,” Borg told Henman.

But no one, perhaps not even Björn, knew that 1981 would be his last great year on Tour. He retired at 26, but could have undoubtedly added to his haul at the Masters and other tournaments if he had stayed in the sport. We’ll never know how many more titles Borg would have won, but for more than a decade, he catapulted the sport to new heights of popularity across the globe. He was and still is as Roger Federer referred to him in the recent Zoom call, “the king”.